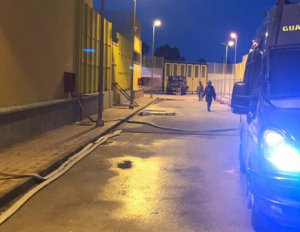 Revolts of inmates close the Detention Center of Trapani Milo

The official news of the closure of the detention centre of Trapani Milo was only filtered on February 14. During a meeting between the Prefect and trade unions to discuss the working situation of the operators of the Badia Grande Cooperative, which has been managing the CPR since 26 September, it emerged that the facility had been closed for a few days and the prisoners had all been transferred to another CPR (probably largely in Macomer), following the damage caused by the fires set during the riots of 4 February and 2 January.
The determination, courage, resistance to daily abuse and the thirst for freedom of those under administrative detention in the concentration camps have once again led to the destruction and closure of a state camp.

Solidarity with those who fight
Freedom for everyone!