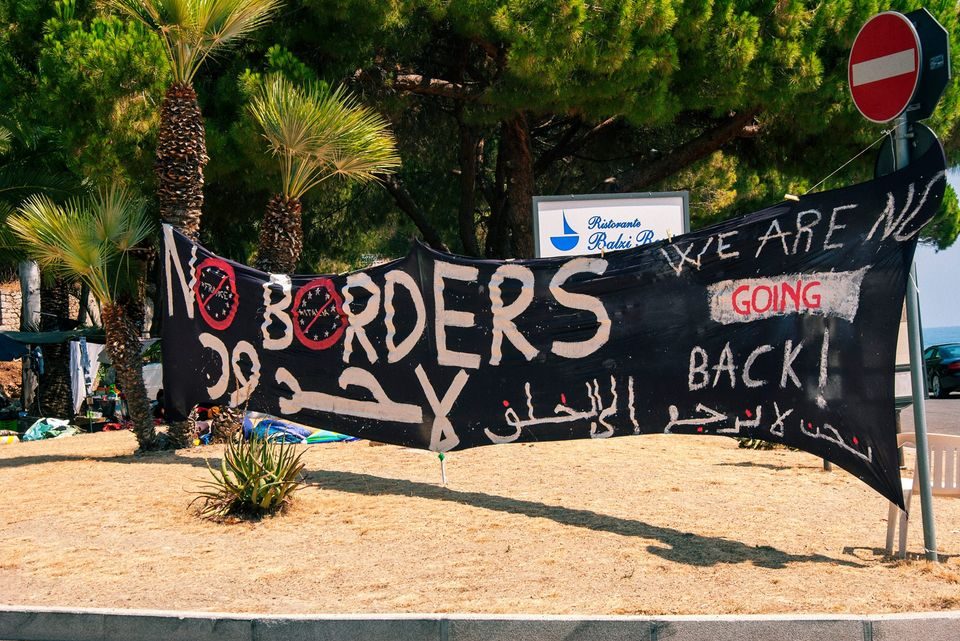 by – Presidio permanente No Borders – Ventimiglia

In the coming months, the trial, which began in June 2019, for the 2015 occupation of the Balzi Rossi pine forest, a few steps from the border between Ventimiglia and Menton, will come to an end in the court of Imperia.
In the summer of 2015, the experience of the self-managed camp known as ‘presidio permanente no borders’ came to life in this border location. The camp was born in June from the protest of migrants against the closure of the border by the French state, and Italy’s attempt to reduce it to a problem of public order. Hundreds of people had marched to the border and camped on the rocks. Because, despite the deployment of French police men and trucks and the first attempts by the Italian police to clear them, staying on the border was their chosen form of resistance.
We are not going back. Open the border. They shouted.
The Balzi Rossi garrison was not the brainchild of humanitarian organisations and did not rely on their resources. Likewise, the camp escaped the will of European states to manage and ghettoise people, to ‘control the flows’ as the rulers say. The permanent ‘no borders’ garrison was a self-managed experience traversed by the most diverse social and political realities, by activists and volunteers who came from all over Europe to support the protest of the undocumented people. Migrants and solidarity activists organised together against the border and at the time of the eviction, on 1 October 2015, we were still there, together, as in the four months of struggle that had preceded that moment.
After the Balzi Rossi eviction, starting in spring 2016, the border violence began to take on a systematic character of repression and control of the border territory. Those who were stopped* trying to cross the border began to be deported to camps (Reception Centres. Sic.) in the south of Italy and the evictions of makeshift shelters, born spontaneously out of need and the will of undocumented people, became the norm, as did the forced and violent fingerprinting.
On 30 May 2016, around 150 migrants sought refuge in the premises of St Nicholas Church to escape a massive deportation operation. The day had started with the clearing of a self-managed camp along the Roya river and continued with racial identifications and round-ups in the city, extensive controls at the station, and the forced boarding of dozens of migrants on a flight to southern Italy. In the evening, the Italian police raided the church, detaining all the people in solidarity and releasing them hours later with a dozen or so travel warrants and several complaints. The migrants responded to this violence with a long march to the border, which ended with yet another violent eviction.
In the months that followed these episodes, attempts were made on several occasions to recreate spaces of self-determination that would allow people to organise together to resist the necessities and violence of life on the border, but also to defend a free and revolutionary space in which to oppose the border device between Ventimiglia and Menton. The response of the authorities was to make the border longer, deeper, more sprawling, and harder to cross. The repression of the border device is so long that in 2022 thirty-five people in solidarity are still on trial for things that happened six or seven years ago, while in the meantime more than thirty people have died crossing this border.
What interest do we have in still talking about what happened in 2015 and 2016?
To reiterate once again that one cannot reduce to the responsibility of some forty people an experience that involved thousands, with a strong protagonism and grassroots drive on the part of undocumented people, who even today suffer a regime of control that does not recognise any freedom of movement.
In short, we are not interested in the posture of the poor white sympathisers who do not understand why the state is picking on them. It is part of state strategies to reduce revolutionary movements (yes, migrations are also this) to processes of a few individuals, pretending not to see the power of collective action.
Instead, we are interested in remembering that while we solidarists suffer denunciations and condemnations for our refusal to accept the border regime, others have paid and continue to pay at the price of violence, deportations and arbitrary detentions for their determination to cross this damned border.
These people struggle daily with the hardships of life on the border, the price of organised passage, life on the streets, racism, guns pointed at them, thirst, hunger, cold, mental disorders, exploitation and, for some, death.
Almost seven years later, in short, the border is more shit than before.
“Perhaps more than imputing to us the crimes we committed, they should highlight those we did not want to commit: racial identifications, violence, deportations.”
A supportive, imaginative and noisy presence in front of the Imperia court will be welcome.

We are not going back.