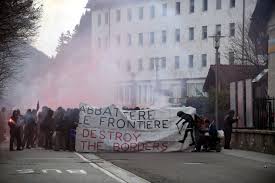 Process for the Brenner facts. A political process. Some considerations.

“What is a man in revolt? A man who says no. But if he refuses, he does not give up: he is also a man who says yes from the very first move. A slave who has received orders all his life, suddenly finds a new command unacceptable. What is the content of this no? It means, for example, “things have lasted too long”, “so far yes, beyond no”, “you go too far” and also “there is a limit beyond which you will not go”. In short, this “no” affirms the existence of a border”.

“In the absurd experience, suffering is individual. Beginning with the movement of revolt, it has the consciousness of being collective, it is the adventure of all. The first progress of an intimately strange spirit is to recognise that this feeling of being a stranger is shared with all men, and that human reality, in its totality, suffers from this distance with respect to itself and the world. The evil that one man felt becomes a collective plague. In what is our daily trial, the revolt performs the same function as the “cogito” in the order of thought: it is the first evidence. But this evidence draws the individual from his solitude. It is a commonplace that bases the first value on all men. I turn, therefore we are.”

Albert Camus “The man in revolt”.

Many times, at school, at work and in the squares, we have wondered how it was possible that horrors such as the holocaust, racial persecution, genocide, mass torture, ethnic cleansing etc. could have happened in the past. How was it possible that certain crimes were perpetrated in front of everyone’s eyes and that, in the general annihilation, nobody did anything?

How was it possible to arrive at racial laws, at the construction, in the case of Nazi-Fascism, of an industrial system to erase entire peoples from the earth? How was it possible, yesterday as today, to allow governments to drag millions of people into immense conflicts and convince the masses that they were doing in their own interest? How was it possible that no one, or only a few, found the courage to oppose, often paying the highest price, while the majority was watching? What were the historical steps that prepared the ground, first in conscience and then in reality, through legal devices, for the fulfilment of such horrors? Are we sure that today, at a time when slogans and racist practices are systematically cleared through customs, we would be able to oppose the same injustices? In which way? 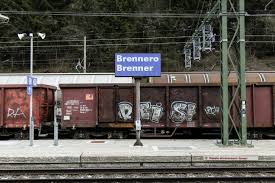 We will not find the answers to these questions between the lines of a penal code, the same one through which, through article 419 of the Fascist Rocco code, the Public Prosecutor’s Office of Bolzano intends to bury 63 comrades and companions who took to the streets of Brenner in May 2016 under more than 300 years in prison.

Those who took to the streets of the Brenner Pass over 4 years ago were moved by the awareness that the main ally of those who build projects dripping with blood is apathy and fear of the proletariat. There was an awareness that only with a little generosity, momentum and decision would it be possible to jam the tragic normality with which most people become spectators of aberrations of all kinds and demonstrate how the hammering xenophobic propaganda had not anaesthetised all consciences. And to do this, a letter to the newspaper, a post on social networks or a flash mob under journalists’ flashes could not be enough.

It cannot be normal to build an antimigrant wall

It cannot be normal to deliberate military invasions, wars, bombardments and ethnic cleansing.

It cannot be normal to passively witness massacres in the Mediterranean or deaths on Alpine passes.

Although a matter for lawyers there would be much to say about the extent of such claims by zealous PMs in Bolzano, against protesters accused of devastation and looting for a parade where the Ministry of the Interior asked (exaggerating) a few thousand euros for compensation and where the protesters were initially charged by the rapids while they were carrying on the tracks.

What objective did the prosecutors in Bolzano set themselves?

This is precisely the point at which the trial takes on a political significance that can be deduced from the incredible discrepancy between the reality of the events that happened on that day and the absurd accusatory design created by the Bolzano Prosecutor’s Office, supported by the media bass drum, worked on fantasy by constructing a narrative aimed at transforming, in the eyes of the court and society in general, a day of fighting against the wall and racist policies into a day where an organised group of vandals found themselves at the Brenner Pass to destroy the charming village on the pass, because they had nothing else to do.

The goal they set themselves is to intimidate, punish and isolate, through a deliberately disproportionate punishment, those who still have the strength, courage and determination to fight against a social and economic system that lives on war, racism, exploitation of people and the environment.

The usual old game of the worst repression of every era: to ignore the social and political context in which a fact has matured by leading back to an atavistic deviance the behaviour of those who took to the streets or those who violated, for some reason, the law. Following this rhetorical pattern, if prisoners in a prison or a camp for immigrants rebel, it is not because of suffering, overcrowding, lack of care or lack of decent food, but because of phantom instigators or alleged leaders. With the same scheme the fascist courts condemned political opponents of the dictatorship and its wars and racial laws, the American courts condemned black militants who rebelled against racial segregation and the Turkish courts condemned Kurds and Turks who opposed Erdogan’s warmongering projects. The law, yesterday as today, serves to maintain a status quo and expresses the power relations between social classes. In this regard, the demands of the Bolzanin prosecutors for condemnation are the most striking demonstration of this. Why rebel when we live in the best possible world?

To ask for 338 years in prison for a collective demonstration in which 8000 euros of damages have been contested is already hallucinating in itself, but what must make us reflect is the ease with which some togated men can do it, as they, taken by a sort of delirium of omnipotence, feel entitled to do so. This is a dangerous attempt to criminalise dissent and intends to lower and lower the tolerance of power towards any manifestation of anger on the part of the oppressed or those who take sides. In recent years, in fact, there have been countless trials instituted throughout Italy against comrades and companions, in particular anarchists, for street demonstrations or associative crimes. In addition to this, the repression, strong also thanks to the tools provided by Salvini and the 5-star movement with the security decrees I and II, is fierce against the most combative workers, such as the workers of SiCobas, protagonists of very hard and winning struggles as well as the privileged object of police and judiciary repression as demonstrated by the maxi trial against 400 workers guilty of having gone on strike, which will soon take place in Modena. 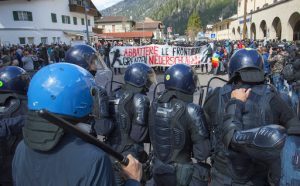 In a flyer published on the Facebook page Bolzano Antifascist was written:

“Hundreds of comrades and companions took to the streets of Brenner, 4 years ago, to break the indifference and inertia with which too many people now accept everything, even the worst injustices, knowing that the symbolic march would not be enough. Hundreds of comrades and companions took on a responsibility, and wanted to break the tragic normality with which certain decisions are taken, such as wars, bombardments or the possible construction of a wall dividing two populations, walls that do not belong to the past, as those who only celebrate the fall of the Berlin Wall would have us believe, but constitute a tragic present: from the wall between Israel and the occupied Palestinian territories to the wall between Mexico and the United States, from the wall between Turkey and Syria to the barriers between Serbia and Hungary. Walls and barbed wire produce death, fear, hatred and racism. Hundreds of comrades wanted to break the mediocre apathy with which the majority of the population lives and learns the most unacceptable decisions of governments, through a TV screen or just commenting on a useless Facebook post”.

It is important, today more than ever, to remember and reaffirm, beyond all instrumentalisation and mystification, the spirit that led hundreds of comrades to demonstrate at the Brenner Pass on that day.

The next hearings of the trial for the Brenner Pass events will be on 11 September, when it will be possible to make spontaneous individual and collective statements, on 2 and 9 October, always at 10 a.m.

Let’s not leave our comrades alone under trial.