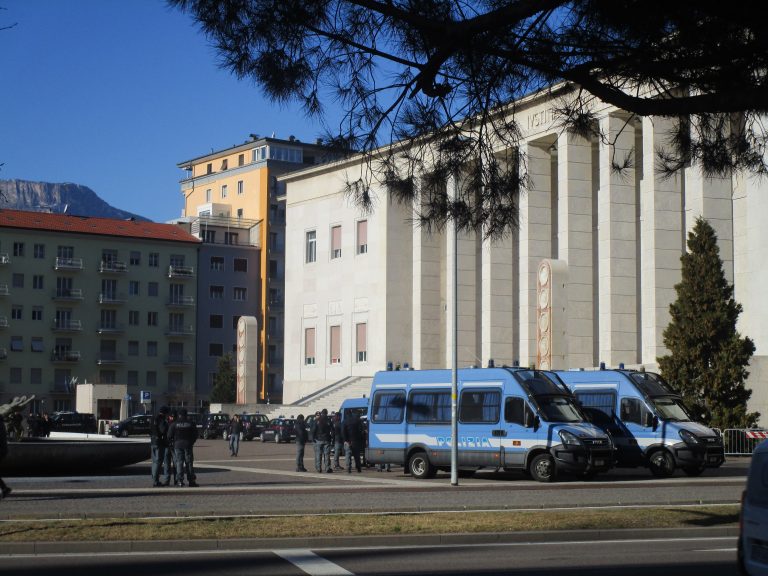 Brenner Process. Statement of the defendants before the Court of Bolzano

On 11 September 2020 in Bolzano, a further hearing was held, once again in a fully militarised court, in which 63 comrades were accused of taking part in the demonstration against the construction of the anti-migrant wall at the Brenner Pass on 7 May 2016. After the comrades have read the statement below, the defence has begun its arguments, which will continue in the next hearings on 2 and 9 October. We remind you that on 7 February 2020 the Public Prosecutor Andrea Sacchetti requested a total of 338 years in prison for the defendants, for charges ranging from “devastation and looting” to other crimes for a demonstration in which about 8000 euros of damages were contested. In Bolzano meanwhile, a leaflet of solidarity with the defendants has been distributed, which you can read here.
For further updates you can listen to the speech of a fellow defendant during a broadcast on Radio Onda Rossa.

Statement in front of the court in Bolzano

Every day the border system crushes thousands of people. What is happening between Syria and Turkey, between Turkey and Greece, in the Aegean archipelago, on the border between Bosnia and Croatia, in the detention camps in Libya, in the Mediterranean confirms that the walls and the hunt for the poor are the face of our present. While goods travel freely from one side of the planet to the other, human beings are ruthlessly divided between those who can cross the borders and those who cannot: between the submerged and the rescued, in the words of Primo Levi. First an economic order – devastating in its logic of war and increasingly looting raw materials, ecosystems and food self-sufficiency – sets the conditions under which millions of women and men are forced to leave the lands where they were born and raised; then a gigantic apparatus of barbed wire, electronic surveillance and concentration camps pushes this “waste humanity” into a terrible obstacle race; those who survive selection must then be so exhausted and afraid to accept any living and working conditions in the countries where they land. And it is precisely for this reason that institutional and social racism can be pointed out as a scapegoat to be blamed.

When, at the end of 2015, the Austrian state declared its intention to build an anti-immigrant barrier at the Brenner Pass, the complaints of the Italian institutions concerned only and exclusively the negative repercussions that this wall would have on the transit of goods. As an emblem of a past that does not pass, the press conference on the barrier project was held directly by the Austrian police and was presented as a mere “technical solution” for the management of the border. The expression itself – “technical solution” – was supposed to make the blood boil.

While the ballet of cross-declaration between the Austrian and Italian governments was going on stage, police checks on OBB trains were already taking place on Italian territory and the “technical solution” was moved further south. For months, anyone with a non-white face could not even get on those trains, in Bolzano or Verona. The border system, on the other hand, is a mobile device, at one with police raids and administrative detention centres. (And it should well reflect the fact that the same “technical solution” was adopted months ago to control and reject the Covid-19 positives among drivers and passengers bound for Austria: the potential “infected”, this time, were us).

For all these reasons someone blocked OBB trains several times; that’s why in the months preceding the demonstration on 7 May 2016 the concept “if people don’t pass, goods don’t pass” was insisted on from many sides; that’s why the speeches on how to make the management of that abomination called “technical solution” fail.

What the PMs presented as a sort of design warped by some “bosses” and executed by many “gregarious”, was simply the feeling that we had to react to that injustice. The “honest citizens” who today do not want to distinguish between what is legal and what is right – that is, they fall asleep in that obedience against which Hannah Arendt’s words (“Nobody has the right to obey”) warn us that with great hypocrisy the institutions have placed before this court – closely remember those who turned the other way when Jews were deported and partisans were shot in this country.

And now let’s go into the merits of the process. The crime of “devastation and pillage” – as such and even more so as it has been interpreted by the MPs – derives directly from the 1930 fascist code. It had already appeared in 1859 with article 157 of the Code of the Kingdom of Sardinia and in 1889 with article 252 of the Zanardelli Code. Not only, in those cases, was explicit reference made to the civil war and massacre, but the penalties ranged from 3 to 15 years. With the Fascist code, on the other hand, the little thing called civil war disappeared, while the basic penalty provided for in article 419 started 8 years ago. Then came the “democracy born of the Resistance”, it will be said. Indeed. The article is still article 419 and the penalties are the same. Now, since in this way the legal absurdity is reached and, compared to it, there is decidedly less risk with the accusation of participation in an “armed insurrection against the powers of the State”, the one defined by article 419 has long remained a so-called dormant offence. One of the few cases in which it was applied from 1945 to the end of the 1990s were the insurrectionary uprisings that broke out in 1948 following the attack in Togliatti, uprisings during which in some cities partisans took to the streets with machine guns… Today the threshold of accepted dissent is so low that the crime of “devastation and pillage” is being applied – and in some cases it has even succeeded – to demonstrations for which it is even grotesque to speak of “far-reaching destruction”. And so we come to the request, formulated in this courtroom a few months ago as if it were a normal shopping list, for 338 years in prison. All in return for a compensation requested by the Ministry of the Interior of 8,000 euros… Let’s leave it up to the lawyers to consider the question – in reality much more political than “technical” – of the very nonchalant way in which the crime of material and moral complicity in resistance and injury is challenged against dozens of people by virtue of their mere presence at that parade.

As can be seen from the leaflets and other materials cited, and even from the films that have been obsessively shown in recent hearings, the intent of that demonstration was to block the lines of communication – in fact the parade was loaded by police and carabinieri just as it was diverting towards the tracks. “If some people cannot cross the border, then nothing and nobody passes”: certain ethical concepts sometimes need a generous practical demonstration.

Borders kill. By drowning, by freezing, by accidents on mountain paths or along railway lines. Or directly, with the lead of the police, as happened in Greece thanks to the de facto legitimisation by the European Union. We do not want to be complicit in all this.

To each his own. As far as we are concerned, we claim the meaning and spirit of that 7 May with our heads held high. As a sign of anger against the thousand forms of state racism. As an expression of solidarity with a hunted humanity. And as a gesture of support. Towards the labourers fighting in the South of Italy, towards the immigrant women who rebel against trafficking, towards the internees in revolt in the concentration camps of democracy. Towards those who, everywhere in the world, do not dodge or compromise, because they love the freedom of all and everyone to the point of gambling their own.

We do not pose as victims of repression. We are aware of what our position on the side of the damned of this earth and against the plans of power entails.

Let the time of submission stop.

CategoryContributes News from the outside
TagsBrenner Process. Statement of the defendants before the Court of Bolzano