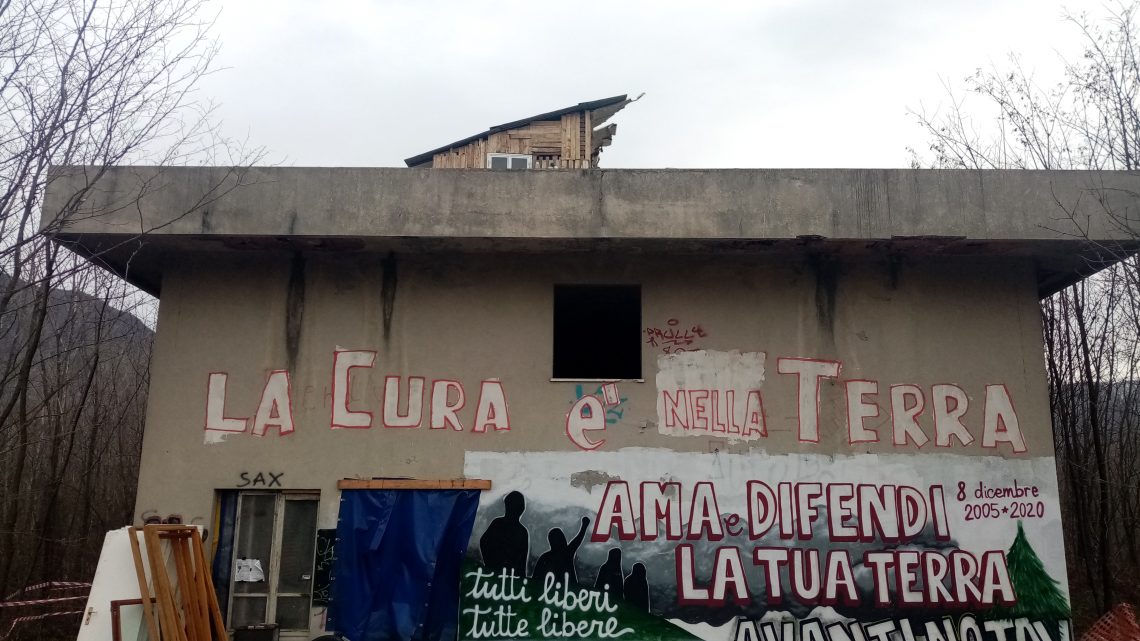 THE FIGHT GOES ON: OCCUPIED THE LANDS FOR THE FUTURE SAN DIDERO CAR PARK (FOR THE TAV PROJECT)

We receive and publish (15 december)

THE CURE IS IN THE EARTH
In this pandemic moment, where the continuous cuts in health care in recent years have left a health system without tools, it seems even more absurd to continue wasting billions of euros on the construction of the Tav.
According to TELT’s project, a new truck terminal is to be built in the San Didero area, where the old truck terminal (which has never been used and is now reduced to ruins) will replace the current one in Susa. In the Susa plain, in fact, it is not even known what will be built: perhaps an international station, perhaps a dump for the spoil extracted from the tunnel works. What they are interested in is having a way of spending the money.

The management of this second pandemic wave shows well what is considered ‘important’, and therefore to be protected, and what can be sacrificed in the name of fighting the health crisis. Health, illness and well-being depend on the environment and the conditions in which everyone lives.
– The degradation of the former San Didero Autoporto land is not due to abandonment, but to forty years of ‘industrial culture’. Those who have owned it up to now have no right to continue renting it, let alone to worsen its state.
– Cementification is forever. Those who have polluted, spilled, buried waste or have done nothing to prevent it, should not wipe their faces with promises of reclamation. Their interest is money and the permanent and irreversible cementing of another piece of the Valley.
– Industrialists follow their interests. They don’t want new infrastructures to give “work to the people”, but the opposite: they want fast connections to relocate, close down and lay off people. We have nothing to thank them for.
– The high-speed construction sites are first occupied by force and then legitimised by expropriation procedures. The law is the bully’s good suit, it is legalised arrogance. No rights for land abusers.
– Covid-19 is caused by a virus, but the pandemic by the social system in which we live. Measures to protect against the virus are necessary to protect ourselves and especially the most vulnerable, but the causes of the pandemic must be fought on a social and historical level. We must tackle the way people live on earth, industrialism, urbanisation, globalisation.

They have just awarded the first contract to start work in San Didero. Of the almost 50 million euro tender, 5 million will be used solely for the construction of a fence to “defend” the land affected by the works, which will transform the area into a new TELT fort. According to the contract, the works to take possession of the land should start by 31 December 2020, otherwise the European funding will be lost.
That is why we will be here from today, with a permanent presence, occupying the land that is supposed to be fenced off.
If they have to come to this land to take possession, they will find us here.