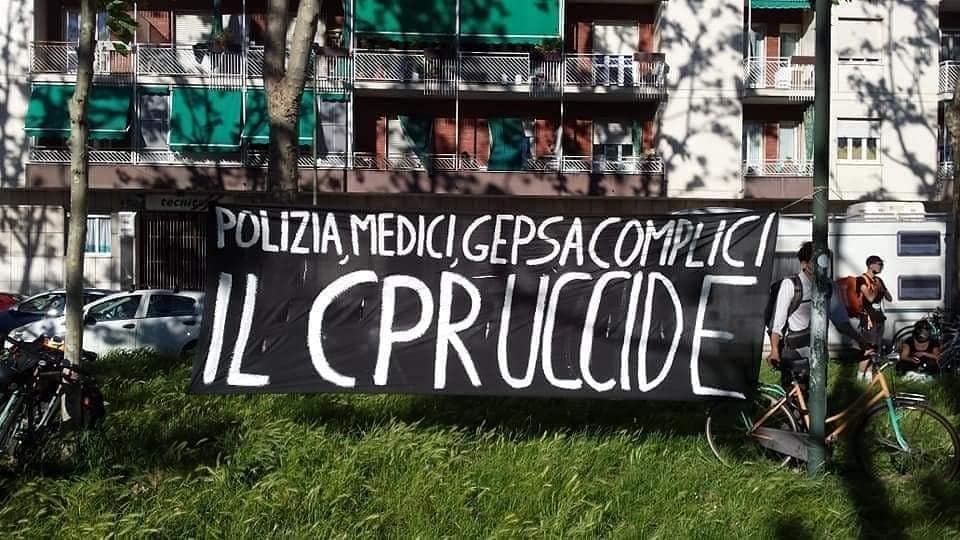 Published on FB- https://www.facebook.com/NoCieTorino/
No Cpr Torino on 16.06.21

From the Centre of Permanence for Repatriation of Turin the inmates tell us about the situation of the last days. The swabs continue to be carried out in a forced way in order to allow the deportations, a fact that the inmates have been denouncing for a long time: they told us about it already in November:
https://www.facebook.com/NoCieTorino/posts/2842766499378649
On Tuesday, June 8, in the morning, some of them were brought to undergo the swab and, aware of the fact that often after the swab they are taken to be repatriated, many of them refused to do so. One boy, who had probably been targeted for his “conduct”, as his fellow inmates told us, was forcibly taken to the infirmary room to force him to be swabbed. At that point many other inmates rebelled and, only after a few minutes, since the CPR medical operators were unable to administer the swab, the boy in question was brought back to his cell with his companions.
The situation inside is, as always, difficult. With the arrival of summer the conditions get worse, we are told that inside the Centre it is hot, you can’t breathe, also because in the bathroom there are no windows. Even with regard to the food, which has always been the reason for rebellion and revolt in the CPR, they say that very little food arrives compared to what they should receive and that it is smelly and spoiled.
Meanwhile, new people continue to be brought into the Center.
They also tell us about the conditions of a boy of Ukrainian nationality locked up in the Green area. As soon as he arrived he was in great pain, due to an operation to remove a kidney that he had undergone a short time ago. He was very sick and kept asking for help and to be brought to the hospital as soon as possible, but as often happens he was not listened to nor helped. Only after a few hours, during which the other fellow inmates protested strongly, the boy was taken to the hospital. Despite the continuous requests for news from his companions, no one communicated anything to him. The other inmates were afraid that he might die in the Center because they knew he was very sick.
The situation traces the systematic failures in the CPR from the point of view of medical assistance, a fact that has been denounced for years and that has become evident after the latest events of the CPR and the death of Moussa. Just about the latter, his companions remind us that he was very sick just before he was transferred in isolation in the hospital where he died, and that he was full of wounds and bruises from the attacks suffered in Ventimiglia, incredulous to be locked up in a violent and dehumanizing place like the Center. The CPR is the place where undocumented people continue to suffer the physical and psychological violence of a racist and discriminating state.
Finally, they tell us that during the moments of solidarity and shared struggle in recent weeks they were all locked up inside the areas, constantly threatened to be beaten and/or taken back to prison. As always, inside the Center, they try to intimidate with threats and truncheons, the people who try to rebel against an intolerable situation, in addition to the continuous attempt to stop communication between inside and outside.
But solidarity cannot be stopped.
We will continue to fight against these places of death and torture, alongside the imprisoned people, trying as much as possible to give voice to those who can not have it!