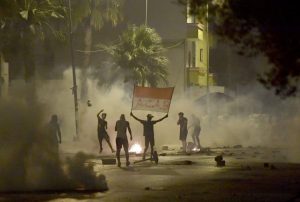 Published on https://hurriya.noblogs.org/ on 21/06/2021
by Hurriya
Ten years after the 2010 revolution, people in Tunisia continue to struggle against police violence and a political system that continues to use repression as the only means to keep social anger at bay.
On 8 June, Ahmad Ben Ammar, a 32-year-old man from Sidi Hassini, a neighbourhood on the outskirts of Tunis, died while in police custody. His body was full of wounds and signs of violence. The day after his death, on the sidelines of the protests, another young boy, Fadi, 15 years old, was assaulted, stripped naked and beaten by the police. The video of the violence generated a wave of protests, which soon became a full-blown riot, in the neighbourhoods of Ettadhamen, d’Intilaka and Sidi Hassine, as well as in other cities in the country. The clashes, which went on for more than a week, were united by a single common denominator: the acronym ACAB (All cops are bastards). 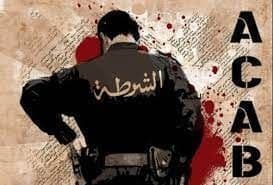 Police violence is a systemic problem in post-revolutionary Tunisia. Last January, on the anniversary of the revolution, anger exploded into violence and clashes in several cities across the country. At the root of the protests was yet another state murder, a pastor in the town of Siliana, between Tunis and Sousse, who was killed by the police. Kasserine, Sidi Bouzid, and a few days later Bizerte, Tebourba et Sousse, the suburbs of Tunis and even the avenue Bourghiba, saw numerous young people and many minors fighting against police and military with an intensity reminiscent of the days of the 2011 revolution. The protesters brought the reality of a country that has been in the midst of a socio-political crisis for years back into the spotlight.

The beginning of June corresponded to increases in the price of sugar and public transport, which were added to those of drinking water and milk, generating protests in some cities of the country. But these are only the latest in a series of increases that have gone hand in hand with rising unemployment and the wage freeze (110 euros on average). The policies of successive governments over the last ten years have done nothing but increase public debt and impoverish the population, condemning young people and adults to insecurity, undeclared work and emigration. The current negotiations to obtain a loan of €3.3 billion from the IMF are just the latest tragic political choice that will have disastrous consequences for the poor, as demonstrated in other countries in the area (especially with regard to cutting state subsidies on energy, oil and food).
Social justice, one of the slogans of the 2011 revolution, is at the heart of the protests that periodically take place in the urban peripheries of large cities or in the most marginal areas of the country. The protesters denounce the economic and social inequalities that the revolution has not been able to eliminate, widening the gap between the elites entrenched in their positions of power and the new generations, victims of planned policies aimed at marginalisation. Unemployment, vulnerability, discrimination, violence, cumulative and intersecting forms of domination, economic and social marginalisation, ghettoisation of spaces are the elements against which a heteroclite generation of young people has decided to fight. The reaction to the police violence in January, as well as that of these days, represent real acts of rebellion against the entire political system (including Islamist forces).
(Islamist forces included) that bases its legitimacy on three elements: unconditional use of violence and complete autonomy of the police bodies; electoral staging; support from the international community. This last aspect is fundamental to understanding how from Morocco to Algeria, from Egypt to Sudan, movements of protest against the incumbent power systems struggle to assert themselves or are brutally repressed. Indeed, European technical and material support to the Tunisian security forces is justified by the fight against terrorism or, particularly in recent times, by the fight against emigration. Since 2015, the European Union has concluded a financing agreement with the Tunisian Ministry of the Interior or support for the reform and modernisation of the security sector, for 23 million euros. Italian governments have also been allocating funds for Tunisian border control for years. The most recent funding was in December 2020, with €8 million earmarked for the maintenance of coastguard patrol boats.

Young Tunisians are caught between unemployment and repression in their own country, and the impossibility of emigrating elsewhere legally. The last year and a half has been a record period for the number of people apprehended at sea by the coast guard. From 1 January to 15 June, 6,659 people were apprehended trying to emigrate and arrested by the coast guard, and 2,817 arrived in Italy. At least a hundred people died or went missing this year along the Tunisia-Italy route.
The Tunisian government has not only been indifferent to the dozens of compatriots who have died or gone missing in recent months in the Mediterranean or on arrival in Europe, whom their families continue to search for desperately, but is also complicit in the detention of thousands of other Tunisians in European camps and their mass deportation.