Considerations on camping Passamontagna against the borders

After two days of meetings and discussions in Claviere (It), on Saturday there was a long march that saw more than 400 people walking on those same border paths crossed every day and every night from people considered illegal by the european states, on the movie for the rest of Europe. Ten km of paths, crossing that border that since the very birth of states continues to separate and tries to limit people’s freedom. Under the strange gaze of the many tourists on vacation, who observed the trucks at the side of the paths and the dozens of Crs staring for hours at the woods waiting for the passage of the caravan, we took the GR 5 and arrived at LES Alberts, where the campsite continued on Saturday night. The state often flaunts a social control that in fact, fortunately, it does not have. Especially in the mountains where the boundary lines arbitrarily drawn by the Power are even more porous and inconsistent.
When unite, there is more streanght.
When unite, it is possible do what individually involves frequent man hunts, pushbacks, beatings and insults by the PAF (border police).
When unite, sometimes it is also possible to win.
Saturday the border didn’t exist. 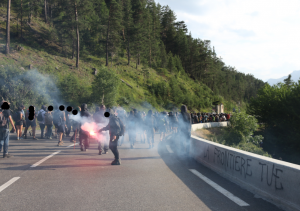 On Sunday we moved in procession to Briancon, walking for another 7 km, first on the paths and then occupying the main road that comes from Montginevro to the city: waiting for us there were numerous teams of gendarmerie and Police National arrived from other barracks in the region, who tried in any way to block the procession so as not to make it arrive in the center of the city.
So much police mobilization to divert the procession from the 500 meters of street in the center: the usual useless theater aimed at silencing the conflict that characterizes these places of transit, full of contradictions that now take the form of 18-hole golf courses, now of smooth ski slopes. They tried to hide the rejections, the beatings, or thefts, the despair of those who just want to continue the path of their lives and find the gendarmerie brading down the street. And it seeks to protect those places of power and social control that are the cause of repression and discrimination in these borderlands. 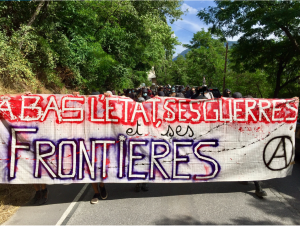 There has been some tear gas, a few bangs and a few stones in response. It is known that the mayor spent his Sunday in the central of the gendarmerie, trying to “limit the damage”. We were not able to pass by the center, but we arrived whole safe and sound at the briancon solidarity shelter, where dozens of people on the move were waiting for us with a nice dinner. None has been taken or hurt. It was great.

The caravan then continued towards Gap, a place chosen because it hosts the departmental court of the Hautes Alpes. It is within these rooms that the asylum applications of unaccompanied minors from all over the region are rejected and criminal proceedings are brought against people from solidarity movements that are active in the fight against the border.
The appointment is today Tuesday, July 27th at 14:00 in Gap.

You are all invited to go from the permanent info point garrison to Claviere, next to the bridge! Against all borders, and against the cops who protect them.
Freedom, Hurriya, Freedom