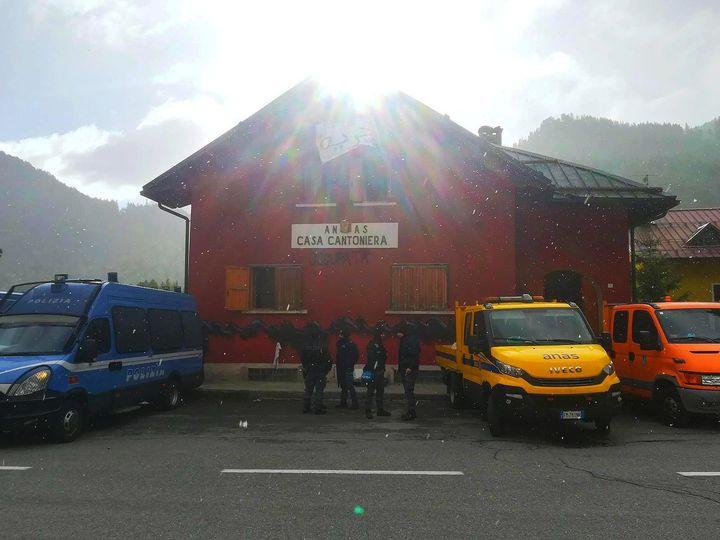 ABOUT THE EVICTION OF THE CASA CANTONIERA IN CLAVIERE

Yesterday, the Casa Cantoniera de Claviere, a self-managed shelter occupied since last Saturday, was evicted.
At dawn, the DIGOS agents waited until the barricades behind the main door were open, before breaking it down and entering the house. The intervention trucks arrived around seven o’clock, half an hour later, while the 19 people inside were identified and charged with occupation.
The DIGOS militiamen did not spare their provocations and their contemptuous behaviour, pushing and threatening the comrades who had come in solidarity.
The humanitarian theatre was repeated once again: a Red Cross vehicle and some volunteers rushed to the site at the same time as the trucks and observed the eviction operations throughout the morning. The fire brigade was also present and entered the house. While the evacuation was still in progress, four ANAS vehicles arrived and immediately began removing the windows from the house. We learned that the building, officially abandoned since 2012, was in fact comfortably used as a holiday home by ANAS officials until the pandemic.
There were no “undocumented” people in the shelter: the many groups and families who had passed through and lived there had left overnight for the border paths.
Another flash eviction, the third in the last seven months at this border. They want to nip in the bud any example of self-management and collective organisation. They want to hide and control those they define as “illegal”, they do not tolerate the existence of liberated spaces where no one is a guest, but where everyone can self-determine and choose how to approach their journey. In Claviere, a village that is semi-desert for most of the year and where the only thing that matters is tourism that fills the pockets of a few, all this is under attack.
Repression is increasing and control is intensifying on this border that has already killed five people and continues to put people’s lives at risk.
A few weeks ago, two young Afghans trying to reach France fell into the Sommeiller torrent, not far from Bardonecchia. Then, in the afternoon of 5 October, 16 people were stranded in the Mont de la Plane area (beyond Cesana), before being taken to hospital in Briançon.
More and more often, travellers who do not know the territory and do not have the necessary information rely on online maps to reach France, often by dangerous routes, through mountains that are too high and too cold.
Paf, cops and gendarmes, and the states that send them, defend this border and make it deadly.
Humanitarianism and tourism collaborate in all this.
Let’s get organised to oppose repression and control: let’s call for direct solidarity and spontaneous actions from everyone, the response will be strong!
We will soon launch an assembly to discuss and organise together, follow the blog updates to find out when and where.
Fire at the borders!