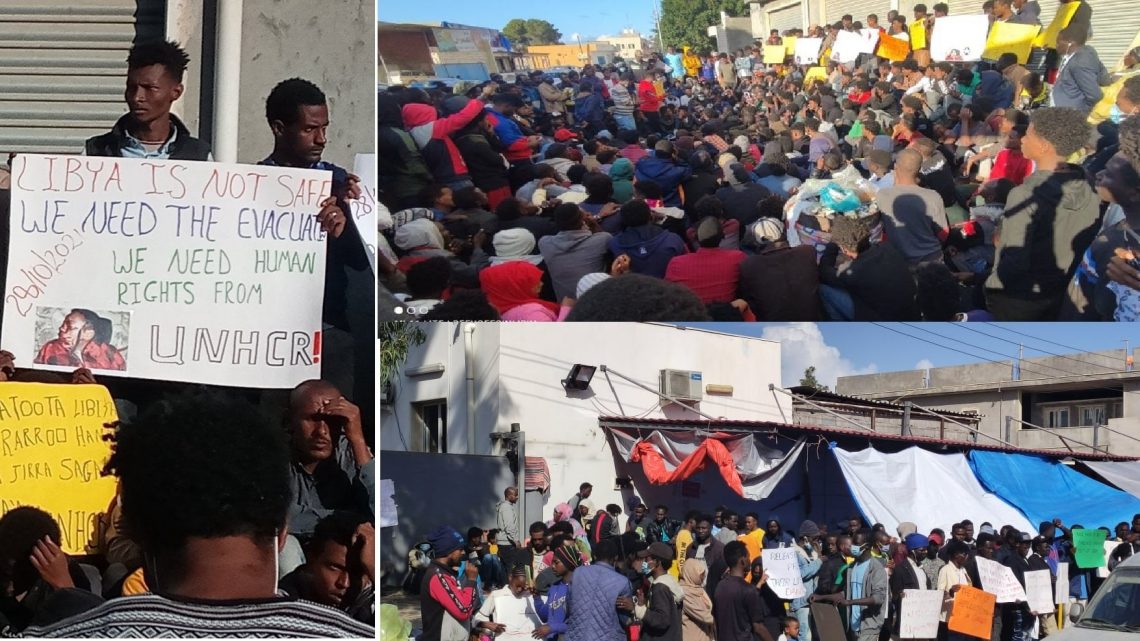 On the other side of the European border, there are those who ask for a pass not to die

For forty days now, in front of the UNHCR offices in Tripoli, there have been around 4,000 people camped out in protest, demanding to be evacuated immediately from Libya to safe countries. Many arrived after a series of government attacks that began on 1 October, real round-ups in which at least five thousand people, including entire families with women and children, were forcibly taken from their homes or from the streets, imprisoned in detention centres and subjected to violence and torture. Since the beginning of the garrison, which has been largely ignored by NGOs and the media, there have been many episodes of violence on an almost daily basis: from the death of a young Sudanese man working at the garrison, who was beaten by masked men, to attacks by security guards at the building where the UN agency office is located.
After the escape of about two thousand people from Al Mabani prison, the police fired on the crowd, killing an unspecified number of people (at least 34) and wounding hundreds, before re-arresting many. Survivors and displaced people took to the streets in front of the UNHCR headquarters, demanding to be registered as refugees and evacuated.
The UNHCR, in fact, is watching, while the EU pretends not to see the episodes of recent weeks, concerned only about the political stability of the country, functional to the control of borders and the maintenance of economic interests (as will be said today in Paris at the conference to “stabilize Libya”), including those of Eni in the lead. In a nutshell, the gas has to pass, the people only properly and brutally selected, ready to be exploited in the Made in Italy campaigns.
The boats of those who try to reach the Italian coasts continue to be rejected by the Libyan coast guard and almost all of those who re-embark in Libya after having failed to cross the border are imprisoned. All this happens legitimised by the Italian government (and the European Commission), which with the Memorandum of Understanding signed in 2017 with the Libyan government (but let us remember that this is a policy that has its roots in the era of agreements between Berlusconi and Gaddafi) actually play a key role in pushing people back into the sea, continuing to provide substantial funding to the Libyan coastguard, which is then also the entity that encourages illegal landings, at a very high price.
Meanwhile, on the EU’s eastern border between Poland and Belarus, the madness of border violence has already killed dozens of people trapped and hibernating in the forests to which they are being pushed back by Polish soldiers. Two days ago, 50 people were arrested at the border for breaking through the barbed wire fence, and while Polish soldiers are shooting, Belarusian soldiers are preventing those who are fleeing from going back. Here too, migrants are the object of a cruel political market. Europe is pointing the finger at Belarusian despot Lukashenko, accused of using migrants as a human weapon to take revenge for European sanctions. It does not speak about the fate of those who are fighting against two armies and the cold to survive, except to talk about walls and forced repatriations.
In response to these dramatic reports, diaspora communities in many cities have mobilised to protest and put pressure on European governments, which have remained silent until now, despite the fact that they are the main and declared responsible – on behalf of the large economic interests of which they are the expression – for the deaths and violence as well as the economic, political and climatic crises that lead people to risk their lives to cross the sea or forests.
But the silence on what is happening is too widespread, a barrier of indifference that is as complicit as it is murderous, not only on the part of the institutions, but also on the part of European ‘civil society’, a few exceptions aside.

The weak general attention at the moment is focused on the eastern borders of Europe, and there is almost no mention of how the repression of immigrants continues even after they have landed on our shores. At the overcrowded hotspot of Lampedusa there are currently 850 people detained, who arrived in recent days and are destined to pass through all the infernal circles of racist bureaucracy that regulates the mechanisms of asylum applications in Italy and Europe. In the vast majority of cases, these people have been deprived of a document for years, condemned to ghettos, precariousness, undeclared work, the streets or detention in Detention centers (CPRs) or prisons.
Only a month ago, in Campobello di Mazara, Sicily, a ghetto where hundreds of African labourers who had come there to pick olives lived burned down, killing Omar, a Senegalese worker. To the insistent protests of his companions, the local institutions responded in the only way they knew how: repression and then plastic prefabs, supplied by UNHCR itself in collaboration with the IKEA foundation. It is practically a new ghetto, but an institutional one, no longer illegal (and therefore reserved for those in possession of documents, irregular immigrants can make do), where workers continue to live segregated in boxes that will be shiny and new for a season, just enough time to photograph them and flaunt them as decent housing solutions. The same UNHCR that advocates the creation of a union of migrant farm workers blocks their eyes, ears and mouths, from Libya to Sicily, when those immigrants and workers demand the minimum recognition, that of being able to move and escape from war, poverty, rape, abuse and torture, and to live without being segregated in a regime of apartheid according to their legal profile, in places similar in every way to the shantytowns that are periodically dismantled, but decidedly more controlled.
And what about those who, once arrived, are forced to live in a reception centre or imprisoned in a Detention center, and if they try to rebel, are arrested, deported, tried? The repression and violence that begins well before the borders made of barriers and barbed wire, continues well beyond, from the phase of so-called “reception”, to the warehouses and camps, to the squares where for years immigrants and solidarity activists have been demonstrating to demand documents for all.
The perverse game of the humanitarian machine of UNHCR and those who support them must be unmasked and stopped.
Against borders and exploitation, the only way is the fight.