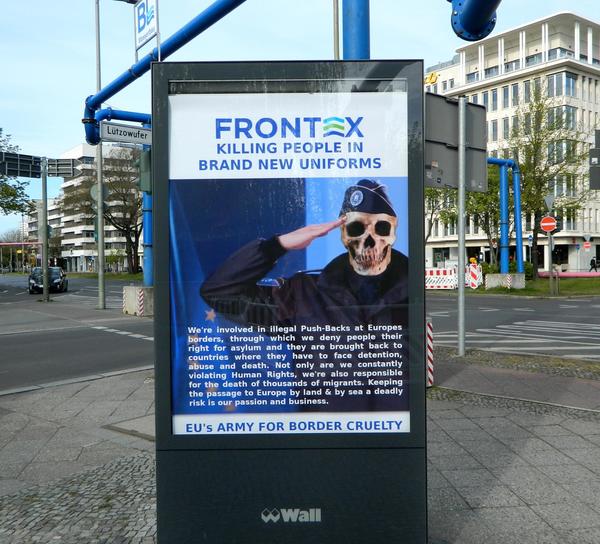 About money, weapons and maps. The tools of Frontex power

On 4 December 2019, after a positive vote by the European Council and Parliament, the l new regulation of the European Border and Coast Guard Agency FRONTEX entered into force. The project to strengthen Frontex foresees that within the next five years the agency will have 10,000 staff for border control and returns, and the budget allocated to the agency, which had already increased in previous years (from around 6.3 million euros in 2005 to 333 million in 2019, plus 5.185%), in the forecasts for the period 2021-2027 jumps from 1.1 billion euros in 2021 to 1.9 billion in 2025 alone.

The agency enjoys extraordinary powers: not only does it have a permanent force of 10,000 units to be deployed inside or outside the EU, including direct and indirect recruitment, but it can also acquire its own assets and supplies in cooperation with EU states. Frontex operates a number of surveillance and data management systems aimed at ‘preventing irregular border crossings’ and has, for example, incorporated the already operational  Eurosur (European Border Surveillance System) under its mandate.

It assumes a pivotal role in all phases related to the return of ‘irregular’ persons to third countries. The allocation of resources helps to get a clearer picture: in 2005 Frontex could count on 80 thousand euro under the heading ‘return operations’ and in 2019 it has been granted 63 million (plus 78,650%). The new 2021-2027 budget has foreseen at least 250 million euro for this activity and 50 thousand people repatriated every year (in 2018 there were about 12,300 for 345 air flights co-financed and coordinated by the Agency, particularly in the Balkans, where Frontex has agreements also with non-EU countries).

Intercepted at sea by means of drones or coast guard vessels, located on land through thermal cameras, heartbeat detectors, or by triangulations of their own mobile phone signals, captured in real time by ultra-high definition satellite images, hundreds of thousands of people have had to face the violence of Frontex’s cops and the technology at their disposal. With increasing frequency since 2019, Frontex has been tendering and contracting out supplies and services, organising specific meetings targeting the market for military vehicles and equipment, turning to universities, private companies and NGOs and NPOs to give structure and legitimacy to its aggrandisement and operations. In “Ristretti Orizzonti. On Horizon Europe, Nestor and border control” we gave an example of how Horizon Europe funding ends up in the pockets of Italian entrepreneurs through projects tendered with Frontex.

Italy is affected by the process of strengthening Frontex in a number of ways: on the one hand, as a member state of the Union, it acquires means for its benefit, and on the other hand, it is home to private companies that participate in the calls for proposals.  Tekne Srl presents itself as a ‘qualified and reliable partner in the design, production and fitting out of industrial, special and military vehicles, and in the development of products, systems and services related to automotive electronics, defence and security, in the military and civil sectors’. On national soil, in 2020 Tekne designed and built a fleet of special detainee transport buses* for the Penitentiary Police and the Ministry of Justice. In 2019, the Italian Ministry of the Interior entrusted Tekne with the supply of 30 “Toyota Land Cruiser” vehicles worth 2.1 million euros to be sold to the Libyan authorities in Tripoli for “institutional needs related to the fight against irregular immigration”. Now Tekne is also a supplier to the European Agency based in Warsaw for a EUR 2 million order for ‘vehicles needed for Frontex operational activities in Europe and in the northern and western part of Africa’.

Another Italian company involved in Frontex contracts is Cantiere Navale Vittoria Spa of Adria (RO), a strategic partner of the Italian Ministry of the Interior in Libya for the construction and repair of patrol boats and training courses for personnel. Cantiere Navale Vittoria has won several contracts with the European Border and Coast Guard Agency and the Ministry of Maritime Affairs in Athens, including the supply of four Coast Guard vessels for a total value of 55 million euros, while on 18 January 2022, Cantiere Navale Vittoria won an order from the Guardia di Finanza Naval Centre for another five Man engines for the P.100 “naval units” of the Libyan General Administration for Coastal Security (GACS). Total amount: 350,000 euro. All in all, this is a large enough sum to close our eyes to the murderous rejections by the Greek police, carried out with the approval of Frontex and the Italian Coast Guard.

The resources in this case come from the European Union’s Internal Security Fund (ISF), a financial support instrument for the benefit of EU states for border management, set up for the period 2021-27 with a total of €1.93 billion.

The first Internal Security Fund (ISF), established in 2014, consisted of two instruments: the ISF-Borders and Visas and the ISF-Police. The total budget of the ISF for the period 2014-2020 amounted to €4.2 billion, of which €1.2 billion had been made directly available to the ISF-Police component. In June 2018, the Commission adopted a proposal for a regulation establishing the Internal Security Fund. The proposed instrument builds on the former ISF-Police component and will be endowed with 2.5 billion, twice as much as the previous one.

On the website of the Internal Security Fund you can find the list and short descriptions of the ISF 1 – Police and ISF 2 – Borders & Visa projects that have been completed and are being implemented. There you can find calls for tenders for the Guardia di Finanza for ‘naval units’ such as ‘Offshore patrol vessels’, patrol vessels, to be made available to the European Agency Frontex, €32.6 million helicopters ‘equipped with aeromaritime surveillance and remote sensing sensors’ used in the ‘control of external borders, in territorial waters, on the high seas and sometimes also outside the Mediterranean basin in the context of operations conducted under the aegis of the European Agency Frontex”, a EUR 20 million “medium twin-engine aircraft” and five EUR 12 million “multi-role very fast lookouts”, also under the aegis of Frontex. The calls for tenders financed by the FSI do not stop at the supply of vehicles and equipment but cover a little bit of everything from national and international training courses for police personnel to language mediation services and the implementation of city video surveillance systems and fibre optic networks.

The agreement with Frontex by the Politecnico di Torino also fits into this framework. The university, in a consortium made up of the Ithaca Association, the inter-university Department of Territorial Sciences, Planning and Policies (DIST) and Ithaca Srl, has won a four million euro tender for the production of maps and infographics needed “to support the activities” of the European Agency. The contract was signed on 7 June 2021 in the city and was countersigned ten days later in Warsaw, the date from which the agreement came into force. It was subsequently ratified despite protests by the Academic Senate of the Polytechnic in mid-December.

ITHACA S.R.L.  a s.u. is a wholly-owned subsidiary of the non-profit association Ithaca, which was founded in 2006 by a collaboration between the Politecnico, SiTi (the Higher Institute on Territorial Systems for Innovation) and Fondazione San Paolo, whose main purpose is to act as a centre for applied research. In 2017 Ithaca starts creating nodes, networks, workshops, summer schools and mapping parties, collaborating with entrepreneurial realities and expanding its role on the services market. In 2018 it became home to one of Italy’s four FabSpaces (a project funded by the European Union as part of the Horizon 2020 programme), and for the occasion Piero Boccardo, Ithaca’s president, commented in pure capitalist style: “The initiative can be the link between the Association and the entrepreneurial realities of the territory in order to profitably use earth observation data for the prototyping of new services and products.” The following year, Ithaca enters the fields of artificial intelligence, smart and Big data, satellite tracking and cybersecurity, also participating in the European research and innovation programme Lexis. Finally, in 2019 it takes part in a project on the prevention of Covid-19-related gatherings and outbreaks, fitting into the context of national surveillance. In 2021, the merger and incorporation project between Ithaca and  Links, a ‘Turin foundation in the field of applied research, innovation and technology transfer’, also created by the Politecnico and Compagnia San Paolo, is launched.

On the occasion of the awarding of the tender, Piero Boccardo stated that “the supply of cartographic products to the European Agency Frontex is a new challenge that makes us proud of a series of collaborations with major international organisations. It is a new opportunity to contribute operationally to support territorial monitoring activities (…)’.

Professor Stefano Corgnati, Vice-Chancellor for Research and President of the Ithaca Association, the consortium’s representative, emphasised that “the collaboration with Frontex is the first example of how the Politecnico di Torino’s ecosystem, represented by its Departments and the system of affiliated companies, can be instrumental in fully integrating research and technology transfer activities”.

For his part, Professor Andrea Bocco, Director of DIST, was keen to point out that “this project fits in perfectly with the Department’s strategic objective of developing a laboratory capable of processing and managing even highly complex spatial data”.

If the history of cartography reveals how maps can be understood as both “knowledge” and “power”, the practical implications of these maps fully fall into the category of “surveillance”, relating both to warfare, political propaganda, border demarcation and the preservation of public order. 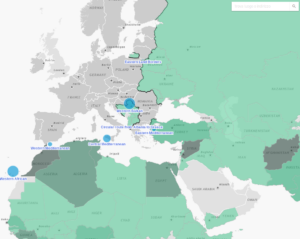 the world from the frontex perspective (https://frontex.europa.eu/we-know/migratory-map/)

P.S. This morning, Friday 22 March, the Federal Office of Customs and Border Security was blocked in Bern as part of the #AbolishFrontex days of action. This office is the institutional link and manager of Switzerland’s cooperation with Frontex, sends border guards on its missions, represents Swiss interests on the Frontex board and is connected to its surveillance network. In addition, a referendum is to be held in Switzerland on 15 May, and one of the three issues is related to the increase of the Swiss contribution to the EU Border and Coast Guard Agency. The EU’s decision to strengthen the agency provides for an increase in the member states’ contribution. The Frontex Management Board meets five times a year and is made up of representatives of the border authorities of the 26 EU member states that belong to the Schengen area, plus two members of the European Commission. The Swiss Confederation, as a Schengen associated country, is represented on the board but has limited voting rights. For an idea of how the work of Frontex is portrayed and what rhetorical and artistic stratagems the Federal Chancellery uses to persuade public opinion of the goodness and neutrality of the agency, the video produced as part of the propaganda for the Yes vote (to the increase of the contribution to Frontex) is online.