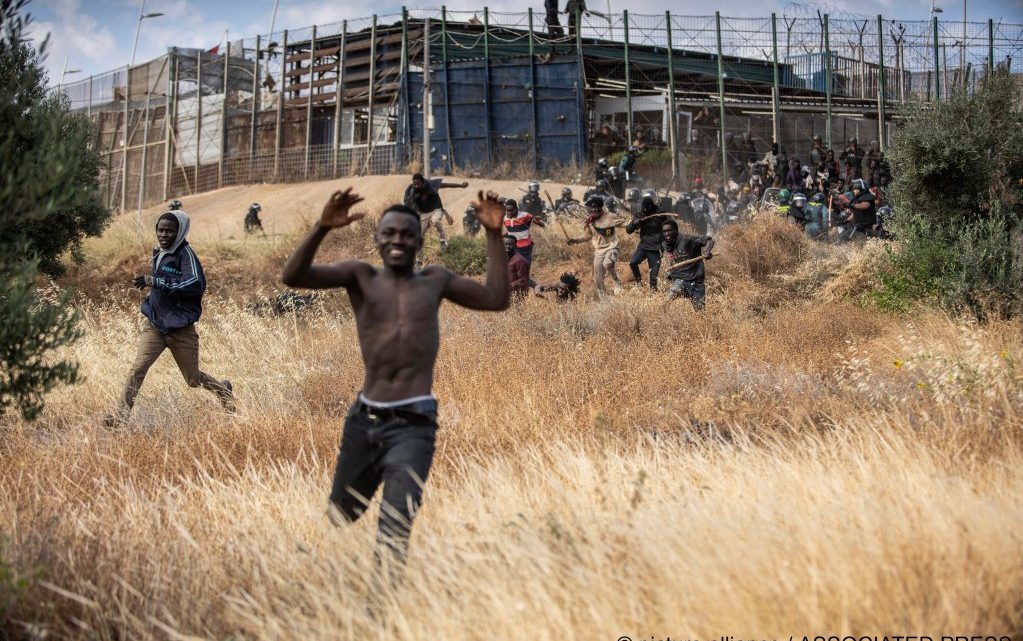 Assault at the Morocco-Spain border: at least 23 migrants die trying to enter Melilla

The deaths occurred during a mass crossing attempt of the Spanish North African enclave by some 2,000 people.
So far, 23 migrants are reported killed and dozens of migrants and police officers injured in a “stampede” of people trying to cross the Spanish North African enclave of Melilla.
Again in Melilla, the mass force tried to break down the border, as has been happening there for years. As has happened in past months, thousands of people stormed the nets, attempting to continue their journey and flee the ongoing violence in the border area, where Moroccan police harass migrants day and night, both in the border towns and in the mountains where they take refuge. A Moroccan police force that, of course, acts at the behest-and with the money-of the Spanish government.

On June 24 some 2,000 people attempted to enter the city, and during a violent skirmish lasting about two hours, 130 crossed the border between Morocco and the Spanish enclave.

Morocco’s Interior Ministry said in a statement that the casualties occurred when refugees and migrants tried to climb over the iron fence separating the two territories. Of course, it does not say whether they were shot. Five migrants were killed immediately and 76 injured, while 140 Moroccan security officers were wounded, the ministry said.
Always easy to give the data they want. There are no other sources.

Eighteen of the wounded migrants later died in hospital, raising the death toll to 23. In contrast, the Moroccan Association for Human Rights reported at least 27 deaths.

Images released by Spanish media showed exhausted refugees and migrants lying on the sidewalk in Melilla, some with bloodied hands and torn clothing. Those who managed to cross the border went to a local migrant center, hoping to get asylum. The others were rejected or detained. Below is a video we received showing the treatment of those detained.

The incident at the border crossing was the first since Morocco and Spain mended diplomatic relations in March.
Indeed, as is now “customary,” migrants are being used as a playing card in the two countries’ political and economic relations.

“A large group of sub-Saharans [Africans]…broke through the access gate of the Barrio Chino border post and entered Melilla by jumping onto the roof of the checkpoint,” the Spanish government delegation to the area said in an earlier statement.
“They are all men and apparently adults,” it added. The migrants arrived at the crossing point at about 6:40 a.m. local time (04:40 GMT) and crossed at 8:40 a.m. (06:40 GMT).

Melilla and Ceuta, Spain’s other tiny North African enclave, have the European Union’s only land borders with Africa, making them a magnet for migrants.
Morocco has deployed a “large” number of forces to try to push the crowds back from the border and has “actively cooperated” with Spanish security forces, the Spanish delegation said in a separate statement.

In March this year, Spain ended a year-long diplomatic crisis by backing Morocco’s autonomy plan for Western Sahara, backing away from its decades-old position of neutrality.
Spanish Prime Minister Pedro Sanchez visited Rabat and the two governments hailed a “new phase” in relations.
The dispute began when Madrid allowed Brahim Ghali, leader of the pro-independence Polisario Front in Western Sahara, to be treated for COVID-19 in a Spanish hospital in April 2021.
A month later, some 10,000 migrants crossed the Moroccan border into the Spanish enclave of Ceuta as Moroccan border guards turned away in what was widely seen as a punitive gesture by Rabat.
Rabat is calling for Western Sahara to have autonomous status under Moroccan sovereignty, but the Polisario movement in Western Sahara wants a referendum on self-determination under UN supervision, as agreed in a 1991 cease-fire pact.
In the days leading up to the end of the diplomatic crisis between Morocco and Spain, there were several mass migrant crossing attempts in Melilla, including one involving 2,500 people, the largest such attempt ever recorded.
The reestablishment of Spanish ties with Morocco has resulted in a drop in arrivals, and the number of migrants reaching the Canary Islands in April was 70 percent lower than in February, according to government data.

Morocco continues to act as the European Union’s watchdog, slaughtering and persecuting according to the economic and political interests of the moment.