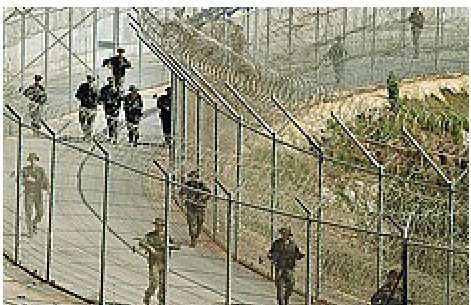 European funding to Morocco to stop people, at all costs

In recent years, the European Union has provided Moroccan police with means, ‘training’ and identification tools. Millionaire supplies, not very transparent, from which those same border guards who on 24 June caused the death of more than 20 people have benefited. Here, too, Frontex plays a decisive role

‘A reference partner for the European Union, a model for others to follow because of its ability to cooperate with our agencies’. This is how the European Commission described the activity of the Moroccan authorities in the field of migration ‘management’ in October 2021. An image that clashes with that of the bodies lying on the ground, immersed in pools of blood, of those who early in the morning of 24 June were brutally rejected while attempting to enter the Spanish enclave of Melilla. At least 23 people died, many more according to independent NGOs, mostly people from Sudan and South Sudan, hundreds were injured and dozens were arrested among the approximately 2,000 people who attempted to climb the triple metal barrier separating Moroccan territory from the Spanish city. But the violence perpetrated against refugees by both the Moroccan police force and the Spanish Civil Guard must be contextualised in a broader picture. EU money financed that violence.

Of the 2014-2020 multi-year budget, around 370 million euros have been allocated to the Rabat government for the management of the migratory phenomenon, 238 of which come directly from the EU Trust Fund for Africa (Eutf): 80% has been allocated to support, back-up and border management programmes with only the ‘crumbs’ for the protection of people in transit (around 11%) and for the socio-economic integration of those who ‘choose’ to stay in Morocco (7.5%). Figures allocated with the usual refrain of the “fight against illegal immigration” which, as on so many other external borders of the EU, justifies the blocking of the flow of people in transit and the impossibility of being granted the right to asylum. A strategy that, in the case of Morocco, laid its first foundations in 2001 when the central Mediterranean route began to see its first flows. Italy is a forerunner with a funding of 10 billion lire, between 1999 and 2000, to finance, according to what has been reconstructed by Asgi’s Sciabaca&Oruka project, the purchase of means, instruments and equipment to help the Moroccan police forces in their activity against ‘clandestine’ immigration.

As reconstructed by Statewatch, an independent research group, on the other hand, at the European level from 2001 to 2010 about 74.6 million euros were allocated to six projects concerning border security. Among these six projects, at least two deserve attention. The ‘Seahorse network’ (total cost around EUR 2.5 million, with an EU contribution of more than EUR 1.9 million), which provided funds for the creation of a ‘secure regional network for the exchange of information on irregular migration’. Statewatch, thanks to documents provided by the Commission’s Directorate General for International Cooperation and Development (DG Devco), has reconstructed that the network is based in Gran Canaria and is linked to that of the Spanish Guardia Civil and the Frontex Agency. And then a project worth more than EUR 67 million provided between 2007 and 2010 directly to the Moroccan Ministry of the Interior: the contents of the project are not known, as access to the documents was denied for ‘protection of the public interest that is overriding the need for disclosure’ and, above all, there are no evaluation documents. “The fact that the EU has not undertaken an evaluation is surprising given the rigorous audit and evaluation standards that should be applied to funding.

The increase in flows is matched by an increase in funding. It is no coincidence that between 2013-2018, again as reconstructed by Statewatch, funding focused on the integration of people already present on the territory, thanks to a change of direction by the Moroccan authorities, which promoted two regularisation campaigns for undocumented people (in 2013 and 2016) and an attempt to guarantee support for refugees and asylum seekers. The approximately EUR 61.5 million allocated by the EU has in fact ‘compensated for the Moroccan authorities’ lack of involvement in the formulation and implementation of a real integration policy’. But the European humanitarian intervention is only a brief parenthesis. Between 2017 and 2018, ‘irregular’ crossings in the Western Mediterranean increased by 40% and the Moroccan authorities claim to have apprehended some 76,000 people. Figures to be taken with a grain of salt, but which justify, according to European lawmakers, the resumption of funds allocated to Rabat. This despite the fact that, on an absolute level, irregular crossings decreased by 25 per cent compared to 2017 and reached the lowest number in the previous five years (150 thousand in total). But little does it matter, as seen on other borders, it is not a question of numbers.

On 20 August 2018, through the ‘Border Management Programme for the Maghreb Region (BMP – Maghreb) 30 million euros are allocated to ‘protect, monitor and manage the borders’ of Morocco in a larger multinational project, with a total budget of 55 million euros, in which the Italian Ministry of the Interior is also among the executive partners for certain actions in Tunisia. These range from the upgrading of IT infrastructure for the ‘collection, storage and identification of digital biometrics’ and the acquisition of air and naval assets for pre-frontier control. Then, on 13 December 2018, €44 million is allocated for the project ‘Soutien à la gestion intégrée des frontières et de la migration au Maroc’, which aims to ‘strengthen the capacities of Moroccan institutions in border protection, surveillance and control’: for a period of 36 months and managed by the Spanish authorities to ‘improve the capacities of the Moroccan authorities to intercept irregular border crossings and carry out search and rescue activities at sea’. Added to this is a programme to combat ‘smuggling and trafficking in human beings’ with funding of EUR 70 million. In December 2019, despite the fact that the number of crossings recorded by Frontex is half that of the previous year (just 23,969), the EU is funding more than EUR 101 million again to ‘strengthen the capacities of Moroccan institutions, in particular for the Ministry of the Interior to counter migrant smuggling and human trafficking, including support for the country’s border management’.

Despite these large sums, transparency is denied. For none of the border management projects have the European institutions provided access to documents, again bringing up the ‘protection of the public interest in international relations’. In November 2019, Statewatch researchers commented “prophetically” on this support: “The consequences of this approach are likely to be dire given that Morocco’s cooperation in border security and surveillance comes at a very high cost in terms of human rights violations committed by Moroccan security forces against migrants, refugees and asylum seekers.”

Here are the fruits of the European externalisation policy in Morocco. “Videos and photographs show bodies strewn on the ground in pools of blood, Moroccan security forces kicking and beating people; the Spanish Guardia Civil throwing tear gas at men clinging to fences,” explains Judith Sunderland, deputy director for Europe and Asia at Human rights watch, prompting the NGO to call for firm condemnation by officials of Spain, Morocco and the European Union and “ensure effective and impartial investigations to bring justice to those who have lost their lives. The number of people who died is still unclear. According to Caminando Fronteras, a Spanish organisation, there are 37 and dozens injured. But the Moroccan authorities are already cleaning up the crimes committed: the Association Marocaine des Droits Humains (Amdh), which works to protect human rights in the country, posted on Twitter two photographs of what are estimated to be between 16 and 21 graves dug up in the cemetery of Sidi Salem, on the outskirts of Nador, the Moroccan city across the border from Melilla. Hrw was able to confirm this by identifying at least 10 individual graves dug out.

In the face of horror and tragedy, the path is already mapped out. The document ‘grounding’ the activities in Morocco foreseen by the Pact for Migration and Asylum, presented in September 2020 in front of the European Commission, foresees financial support for the period 2021-2027 to implement, once again, border control and above all ‘to support the voluntary repatriation of foreign citizens from Morocco to their countries of origin’ as well as the streamlining of procedures for the repatriation of Moroccan citizens who do not have the right to be on European territory. Finally, the document clarifies the importance of the ‘strategic dialogue’ that the Moroccan authorities have maintained with Frontex, which opens up the possibility of signing an operational agreement with the agency that monitors Europe’s external borders. There is no change in strategy, despite the fact that there were only 3,965 irregular crossings recorded in the western Mediterranean between January and May 2022. The invasion is not there: the dead lying in the pools of blood in Melilla reveal once again the face of a Europe that rejects and delegates the dirty work to the police of autocratic countries.