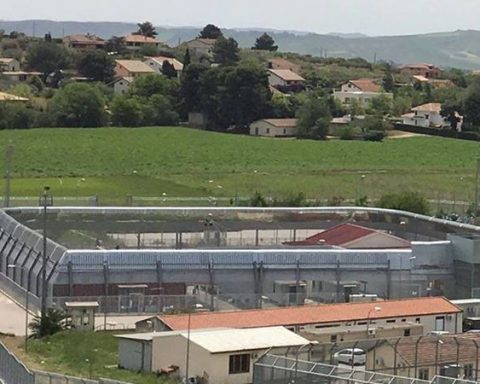 NEWS FROM THE DETENTION CENTER OF CALTANISSETTA (SICILY)

On an August morning, some solidarists gathered in front of the gate of Pian del Lago, in Caltanissetta, where the war of the border regime is at its best.
Pian del Lago, a former military base turned into a CPT (ex way to call detention center, now CPR) in 1998, is now a key logistics centre where migrants are made exploitable and deportable. The immigration office, the centre for asylum seekers and the most strictly detention facility, the Centre for Permanence for Repatriation (CPR), are located here. The absence of medical care – with the exception of psychopharmaceuticals, – the continuous deportation flights that follow one another without any possibility of legal evasion, the devastating heat in rooms without ventilation, in a place in the middle of a Sicily even more on fire for the ecological catastrophe, make the confinement even more inhuman.
Over the past few months, there have been many protests in the CPR (detention center) blocks, harshly repressed by the police and carabinieri who are based in the camp. At the end of June, in yet another riot attempt, a person fell from the roof and the police let a murderous time pass before an ambulance could be called. At the end of July, a fire was set in one of the blocks of the centre by those who preferred to risk being burnt to death rather than be locked up in a place worse than prison – so say those who have been in both – or be deported. Every week flights leave Sicily for Tunisia and Egypt, filled with people detained in the CPRs of southern Italy.
It is also for this reason that an attempt was made to concretely jam the deportation machine by expressing active solidarity with those who resist in the racist isolation of this lager.
If those who tried to pass through the gate to go to work inside the centre for once felt very uncomfortable doing so, the racialised women and men waiting for the immigration office to open felt instead heartened by the presence of those who were denouncing the forms of cruel violence, perennial blackmail and racism with which the state makes their lives unlivable. In chatting with some of the other migrants who live in the asylum seekers’ centre, the conditions of neglect and misery in which they are left in the ‘reception’ emerged. Although they are not aware of the existence of a prison next to their dormitories – the CPR-, they told of the shouting and beating that can be heard from there, where the high fence isolates the blocks where those who are denied documents are imprisoned.
Thanks to the presence of some comrades, the bus in which deportees are normally taken to the airport was blocked for two hours inside the centre.
Compared to the military impressiveness of the repression and deportation device, this morning of struggle was very little. Nevertheless, it shows us the importance of continuing to think that the war against those who want to move from those places where democratic Europe has built itself – and continues to do so – by torturing, raping and massacring, can be stopped.

Brick by brick, wall by wall, we will make the European Fortress fall!