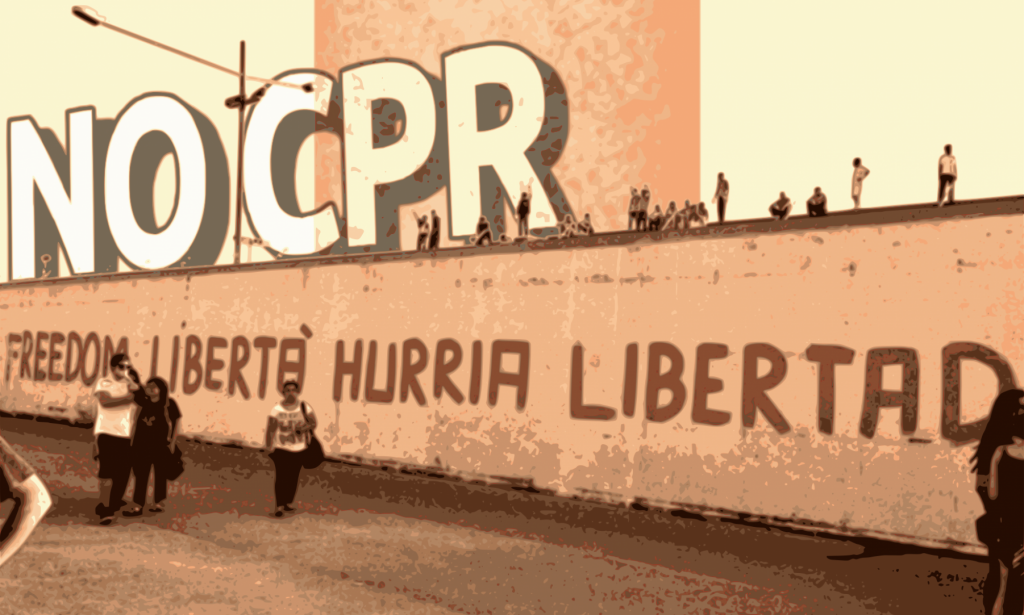 ANOTHER DEATH AT THE CPR IN GRADISCA D’ISONZO – UPDATE

People die in Gradisca: we know who did it

On 31 August 2022, a 28-year-old Pakistani man whose name we do not know killed himself in the CPR (detetion center) of Gradisca d’Isonzo. He had entered an hour earlier.

He killed himself in his room; his fellow inmates found him.

Voices from behind the wall

From behind the walls of the CPR they shout to us that the Pakistani boy “did the rope” right after the meeting with the Justice of the Peace of Gorizia who had confirmed his stay in the centre for three months. They ask us to say that he killed himself out of despair over that choice about his life. They tell us that he was in the blue zone, where they take away the phones and where people who have just entered go. The detainees tell us that the centre workers keep the boy’s name from them, despite their requests.

They tell us that many, after the hearings with the Justice of the Peace, feel ill and others have tried to hang themselves, later saved by their fellow inmates. They tell us that in those moments one feels very sick and loses one’s mind. They tell us that it is worse than any prison and that psychotropic drugs are put in the food. They ask us that parliamentarians and journalists tell what really happens in the CPRs and enter.

Those who speak to us tell us that they fear for their safety because of what they are telling us. He tells us that he is exposing himself for everyone but that the military is watching him. He gives us his name and address because he fears for his life, just for telling what is happening. And we know it well, we remember as if it were yesterday the serial deportations and the immediate seizure of the phones of all the detainees who had testified the night of Vakhtang’s death.

Repression of solidarity (at gunpoint)

On the evening of 1 September, some solidarity activists walked past the CPR to show solidarity with the inmates and hear their voices on the death of the Pakistani boy. While they were there, a carabinieri squad car arrived, called by the CPR staff suspicious of the presence of some people outside the walls.

From one of the squad cars, a carabiniere came out and started to run, not very fast, pointing a gun at one of the sympathisers. The people were searched and their mobile phones seized momentarily. After some time, the solidarists were taken to the barracks to be identified, where they had their twelve-hour detention validated. In the barracks, one of the solidarists was forced to undergo a full body search and to undress completely.

The existence of the CPR requires silence: the mere presence of someone in its vicinity arouses suspicion and results in detentions, searches and, as happened to other solidarity activists in 2019, travel warrants. The CPR is institutionally a place whose existence must be ignored, even on days when it kills someone.

The violence of the gun pointed has no justification: the disproportionate police reaction in front of a white boy who was not committing any crime questions the level of abuse to which people who do not have the protection of citizenship are forced every day. Abuses of power and institutional racist violence keep the CPRs going every day.

Giovanna Corbatto, the Guarantor for the rights of prisoners in the municipality of Gradisca, commented in the Messaggero veneto: ‘We do not know if and what ghosts he was carrying around, whether his dramatic decision was planned or improvised, whether he had pathologies. Having spent only an hour at the CPR, I would be cautious in citing the living conditions inside as the cause or concomitant cause of such an extreme gesture’.

The mechanism put in place by Corbatto is that of victim blaming: faced with a boy who has killed himself inside a facility on the decency of which she herself is supposed to supervise, Corbatto refuses to acknowledge institutional responsibility and literally blames the victim.

The Cpr is a lethal space: this is an undeniable fact, confirmed by the succession of deaths. Whoever dies in there, however they die, is an institutional death, that is, a state death.

In the Gradisca d’Isonzo lager, too many people have already died.

07/12/2021: Ezzeddine Anani, a 41-year-old Moroccan man, takes his own life in the cell where he was held in solitary confinement for Covid quarantine.

14/07/2020: Orgest Turia dies of an overdose and one of his roommates escapes the same fate. While the prefect of Gorizia Marchesiello says all is well, first the local press spreads the rumour of a new death by brawl, then the mayor Tomasinsig and police representatives reintroduce the infamous narrative of drug addicts and drug dealing without the knowledge of the jailers. In reality, Turia is not a drug addict, he is a man of Albanian origin brought to the CPR because he was found without a passport.

18/01/2020: Vakhtang Enukidze, a 38-year-old Georgian citizen, is killed, according to witnesses, by beatings received by armed guards at the facility. Following his death, all witnesses are deported, their mobile phones confiscated, Vakhtang Enukidze’s family in Georgia is under great pressure not to take part in a criminal trial and, to date, no official results of the autopsy on the body have been announced.

30/04/2014: Majid el Khodra dies in hospital in Trieste, after months in a coma, after a fall from the roof of the then CIE in Gradisca, in August of the previous year. His family was denied the possibility of seeing him for months. After his death, the Cie closed, to reopen a few years later under the new name of Cpr.