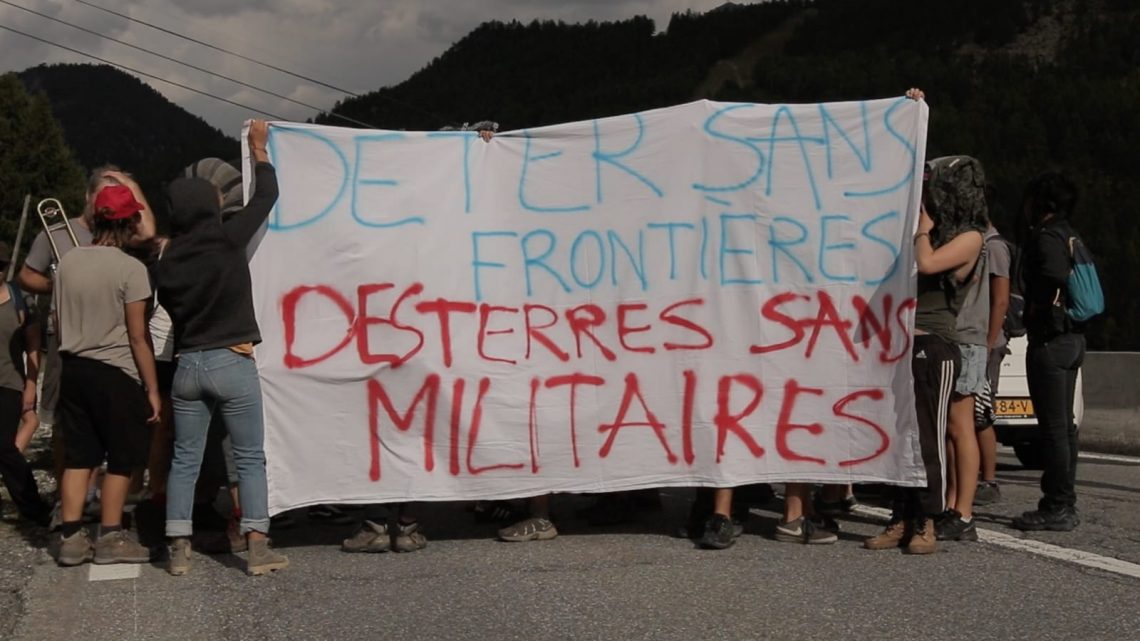 On the border between Claviere and Montgenevre it was another night of hunting for the migrant. Young racist and arrogant gendarmes continue to play the game of the war on mountain paths hiding in the rocks and trying to terrorize people that want to pass. Yet another attack on a group of boys, other wounds, other stitches.

This is why we have chosen together with the “Fanfare Invisible” from Paris to stop the touristic Italian-French border for about an hour.

This is the flyer that has been distributed:

Claviere is an Italian town two kilometers from the French border. Since last winter, it is a place of passage for migrants who want to enter France. For a few weeks the violence at the border has intensified: soldiers and cops steal, beat, threaten and insult those who stop without documents.

Cowboys in the mountains

Police and military presence on mountain trails has increased; there are violent detentions, always at night, humiliations, of the “if you move fired”: as well as the practices that cause the immediate endangering of the people involved.

For a few days, I’m a military too, I’m back on the paths. They play wars, train by hunting at night with migrants accompanied by PAF police, who like to threaten and beat people passing by.

On May 7, Blessing Matthews died drowned in Durance trying to escape from the police.

During detention, the frontera police are increasingly giving themselves to acts of violence, in particular to force people to stop their fingerprints. Below, a testimony collected on August 13 by a 16-year-old young man stopped, who refused to say his fingerprints:

“They started beating me to force me to give my fingerprints, once, then a second time, louder, two people came to give reinforcements, they pushed over to stop me, to force me to open my hands, two from each I resisted, and then one of the four policemen grabbed me by the back of my head and slammed me into the ground, I told him he could kill me, but he did not give me my fingerprints, so they loaded me in a car and I’m thrown in the street, just the side of the border, in Italy I stayed there on the ground, 30/40 minutes.I was too sick to get up, then they found me two people and they called an ambulance “

On a daily basis, people passing through are humiliated by body searches, even in private parts, and humiliated with insults and openly expressed racism.

the political leaders continous to use the same words, that we live in a state of law. This is the meaning of the border: it means patrols, hunting against the migrant and humiliations for those who do not have the documents.

We have also to consider the 10 years in prison for those “helping the illegal immigration in a organized band”. The intimidation and the systematic endangerment of people passing through are the only “democratic order” of the border.

These are not exceptions, nor anomalies: all these facts are the daily practices of people and institutions that have the rule of law to better justify the violence necessary to their power.

Faced with the violence of the police, of the State, we will continue to cross the border and fight.