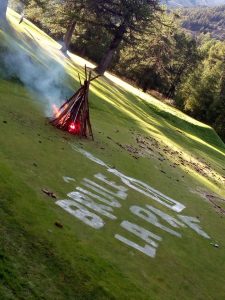 Five days during which more than 300 people coming from different parts of Europe and beyond shared analysis, practices and thoughts resulting from their personal experiences.

We moved between two villages in the mountains. Mountains where someone decided to make an area of selection and control, a border zone. This, as all other borders, divides, selects, and kills.

Every day in these mountains, numbers of people are obliged to walk for kilometres, escaping from different kinds of police in the attempt to arrive to France – for them every other way is closed.

The same mountains where hundreds of tracks, goods and trains pass every day without problems or controls, where billions of euros are wasted in the attempt to build the TAV, where there is a tunnel easily crossable for those who have money and documents.

It is because we don’t believe in this system of management and control, in this disposition made by social and economic borders everywhere, that we decided to take a time to think together about how to fight it.

In this historic time during which new barriers and fascisms are rising everywhere, during which different governments carry out security/control and exclusion politics and increase the indiscriminate authorization of groups of people, build more detention centres and deport the «undesired», we feel the need to organize better.

People and collectives coming from Italy, France, Germany, Switzerland, Slovenia, Turkey, Spain, Greece, Netherlands, etc discussed together on the roots and consequences of the current exclusion system, on the concepts of solidarity and hospitality. We discussed about our organization methods and the roll of communication. And we spoke about the fight against identity control. Especially as during the first two days all the streets for accessing the camping were controlled by ordinary and political police checkpoints, eager to identify every person, taking photos of them together with whatever they found interesting during searches of their personal belongings.

On Friday the 21st a demonstration was planned in Bardonecchia, a demonstration against all borders. Bardonecchia is a small border city on the Italian side, where all those who try to go to France by train, by the Frejus tunnel, or by foot without the piece of paper considered «right» are rejected. A demonstration that was meant to oppose the fact that goods and money have more freedom than people in passing every border, while people are otherwise selected and rejected.

We did not do that demonstration.

The day before, the mayor of Bardonecchia, Avato, surpassed himself in order to alarm «his» citizens about the dangerous demonstration against the borders. He advised everyone to remain inside the houses in order to «facilitate the maximum level of activities of control by the police forces operating on the territory». This practically meant: 25 vans and 10 cars which transported the police and carabinieri, two water canons and countless digos (political police) hidden everywhere. Bardonecchia was completely militarised and deserted, all the parkings were left free for vehicles of the police and all shops were closed. From the other side of the border, ten vans of the French gendarmerie were parked in the fear of us trying to pass that imaginary border.

We didn’t want to fall in the game of conflict representation, surrounded by all the police present, without being able to move nor speak with anyone because the city had expressly been made a desert.

We did not want to become actors of an useless theatre.

We chose not to go and not to facilitate their mediatic and political play. We decide when to move or to attack.

Seventy people went to do a walk in Bardonecchia with a megaphone in order to tell the situation. They were surrounded by numerous police.

All in all the city was blocked the whole day by police forces, which resulted in the state spending loads of money. For nothing. It’s always something.

On Saturday the 22nd we packed the camp and moved with all the cars to Claviere to continue the camping. Our caravan stopped in Oulx, a city where the TGV to France has a station. There we did some interventions with the megaphone and then continued to Claviere to build the camping.

Claviere stands exactly on the border. Here it is common practice for the French police to arrive at the entrance of the village to drop the «migrants» caught in their attempt to cross. It continuously checks the paths and roads that lead to France. But in the village stands Chez Jesus, an occupied and self-organized shelter/refuge that practices direct solidarity for all people who try to pass. Providing a free space and time for organization to those who want to pass this border and to those who want to fight it.

We well know the violence of the police on the people that want to pass (threats, beatings, thefts), so we want to fight the territorial dispositive that allows only the rich to pass freely through the area, while migrants are hunted and stopped.

In the afternoon we went for a walk on the golf course. We stepped on perfect patches of grass, those 18 holes that cross the border and which are themselves crossed daily by golf players. During the winter time the same lawns become the bottom parts of ski slopes, skied over by hundreds of skiers that don’t realize they are crossing that imaginary line called border.

The golf course is property of the Lavazza family, owners of the multinational corporation of coffee that has created its empire through the exploitation of human and evironmental resources in the old and new colonies in Latin America and Africa. The French part is managed by the municipality of Mongenevre. 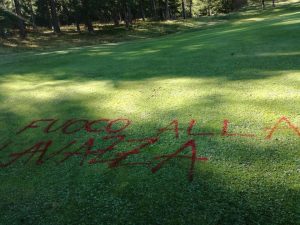 In order to loudly declare the freedom of everyone to move and live where and how he/she thinks is best, to protest against those multinational corporations that enrich themselves everywhere in the world, exploiting the same territories from where the people are obliged to flee from, on Saturday the 22nd some hundreds of people occupied a part of the golf course. These lawns, normally exclusive for rich people became a playground for popular sports: rugby matches, volleyball and frisbee were played for a few hours and accompanied by improvised music.

The French police lined themselves on the paths and on the golf course to block the walk from continuing, throwing tear gas and stun grenades.The Italian police even furnished themselves with a water cannon that was deployed in order to protect the lower parts of the golf course.

Everytime that the interests of the richest are threatened, the mass media makes every effort to distort the reality, to villify and destroy all the possible threats. On these mountains we perfectly know the strategy of creation of the black man, violent and mad. It is exactly according with this strategy that the violence of those who, with a suit and tie, loot and impoverish tens of thousands of people and devastate entire areas of the globe with monocultures and pesticides. It is the violence of uniforms that hunt and run after those who try to continue their journey here, that doesn’t even pass in the media spectacle. The economic and political powers aligned with the media accuse the way of struggle of some hundred of people that try to highlight and fight these unaccaptable contradictions. We’ve grown accustomed to it. The lumps of land that have been raised from the golf course are drenched with the blood of two boys and one girl that in the last months have lost their life on these paths in the attempt to continue their journey. Luckily in this historical moment that is marked by cowardice and abuses, there are some who cannot stay calm and silent with seeing the contradiction. . 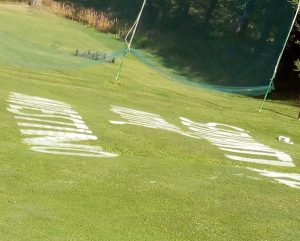 Saturday night we did a party, and Sunday the evaluation and the closing of the camp.

The French police was engaged in controlling all of the people crossing the border that day, even arresting two people and keeping them in custody for the whole day.

But solidarity doesn’t arrest. The fight against all borders and their dispositives neither.

Some participants of the moving camping Passamontagna