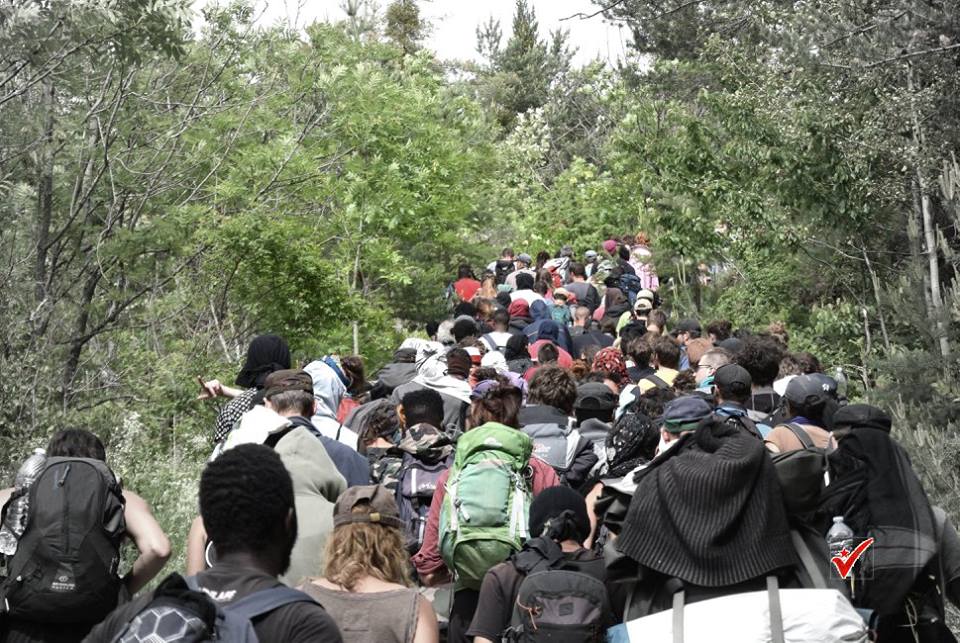 2 October 2018 Off By passamontagna
About the three PASSAMONTAGNA days and other
With the Camping Itinérant Passamontagna, we walked three days on the roads and the paths of these border mountains. We crossed them in blocks, with music, by humming, and singing. We talked to each other and made assemblies and discussions about the border apparatus, the reception system, the commodification and exploitation of the migratory flux by the states. We crossed this imaginary line called border to reaffirm the fact that we do not recognize it. No documents required.
Against all systems of division, classification and selection. Against the repression apparatus that starts from the countries of origin which the west still colonizes, till the reception centers, the holding facilities, the police and military raids from the cities to the borders. By passing the villages of the Clarée valley we made interventions with a microphone, we put music, sang songs, we made tags and put up antifascist posters.
We didn’t forget who is the responsible for the three deaths in the border last month, neither Generation Identitaire who’s people are
entertained by reporting the crossing migrants. We didn’t either forget the armed force of this border, the men and women in uniforms who chase every day the undocumented people who are considered less worthy than every commodity that circulates every day from one side of the border to he other. During that time, the Italian government and its minister of the interior enjoys himself by making politics on the back of the exiled, by closing the ports and blocking the ships of those who fled searching another life.This political game disgusts us.
About these three days, we have ALL arrived in Briançon. The governments and the powerful close the borders, we open them with our actions, we will always will. These three days have passed and the border apparatus continues its selection operation that has become deadly since a long time. One person was beaten from the PAF (Border Police) next night. This person got caught trying to pass in France, he was beaten because he didn’t want to be repulsed back in Italy neither sign the “refus d’entrée” document (refusal of entrance in the territory). Last weeks those who try to cross the border have been more and more threatened
with weapons, the police and the military force menace to fire to those who don’t accept the intimidations. Last days a lot of underage persons have been repulsed even if the law attest the opposite. Yesterday a young man of 17 years old, heavily sick, tried two times to get at the PAF establishment to be lead away to the hospital. He wanted to be taken charged by the french system after several months of non treated sickness in the Italian reception centers. He couldn’t even stand up.
They told him that they would take him immediately to the hospital, instead of this they fooled him. They made him sign a  document which content is not known and then repulse him back in Italy.
Our anger never settles, it grows bigger and bigger. The militarization keeps killing. Neofascists haven’t come yet. We will never let these valleys in the hands of the army and of the fascists who keep trying to insinuate in our territories. We will stay in these mountains, we will keep crossing them and keep struggling till there would be only wreckage remaining from the borders.
CategoryNews from Monginevro border