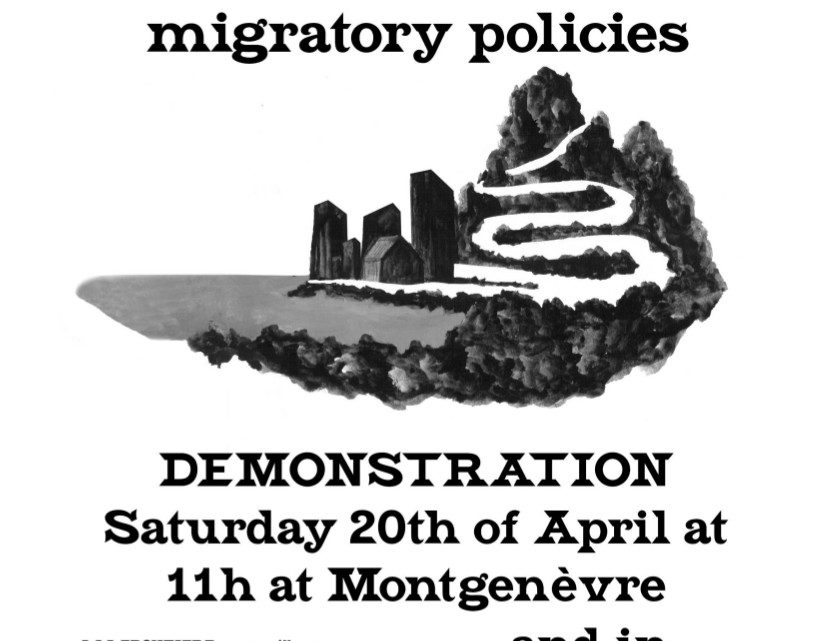 Call for a protest at Montegnèvre on the 20th of April

At the border and elsewhere, let’s fight against migration policies

Borders do not ensure the security of the territories but that of the
financial powers that possess almost all the resources of this world.This mechanism of identification, choice and exclusion serves theeconomic interests of states and security industries and defines a whole population of people without rights, invisible and exploitable.

The border is everywhere, even in everyday spaces. It cannot be riassumed in a chain of mountains separating two spaces, nor in a barbed-wire fence. The border is in the administrations that give residence permits, or in the expulsion documents.
It depends on the social status: the rich can expatriate, the poor have no choice but to “migrate”. It depends on the colour of the skin, because if you are not white, the controls are systematic. An airplane, a train station, an airport, a bus ride, for some are synonyms for travel. To others, they mean raids, deportations, concentration camps. An Ibis hotel, a ski resort, holiday resorts for some, and manhunting and imprisonment for others.

To fight against migration policies is to denounce the imperialist strategy of the western states that maintain corrupt systems, fuel wars,
support dictators and push thousands of people into exile.
It is also the same states that stigmatize and criminalize the people who enter the territory, trying to reduce them to being a blackmailable and exploitable workforce.

The border is everywhere, in the stations, on the paths, in the trains,
in the centers of retention, in the institutions…
Then organize a protest in your city or join us on the Montgenèvre hill
on April 20th at 11 a.m.