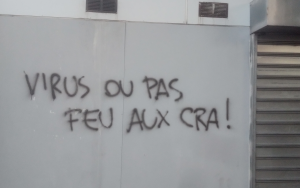 Since Monday 2 November 2020, the prisoners in building 1 of the CRA (detention center) in Vincennes have been on hunger strike. They join other undocumented migrants in struggle in the Detention center of Toulouse and Marseille. They have written a collective communiqué which is published here, where they explain the reasons for the strike: the rotten sanitary conditions (confirmed by the video released here), but also the provocations and humiliations of the cops, without forgetting the dirty work of the judges and the hidden thefts.

After the beginning of the strike, the cops started to put a lot of pressure on the prisoners, for example by searching the cells thoroughly and repeatedly and overturning everything they found. The strikers are holding out, but they need maximum support from outside: let’s not hesitate to call the booths, to harass the administration of the CRA or the association which intervenes in the centre, or to look for other means to show our solidarity despite the confinement.

AGAINST CRA AND CONFINEMENT, SOLIDARITY WITH UNDOCUMENTED MIGRANTS IN FIGHT!
FREEDOM FOR ALL! 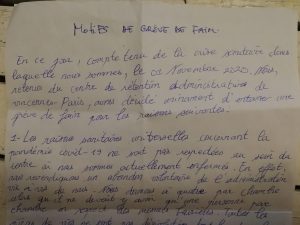 In these days, considering the health crisis in which we find ourselves, on 01 November 2020 we, held in the administrative detention centre of Vincennes-Paris, decided unanimously to start a hunger strike for the following reasons:

1 – The universal sanitary reasons concerning the covid-19 pandemic are not respected within the centre where we are currently confined. Indeed, we denounce a voluntary abandonment of the administration towards us. We sleep four to a room when there should only be one person per room in respect of the barrier measures.

Not all living rooms are disinfected every two hours, which should normally be the case. We don’t even have hydro-alcoholic gel. No masks are worn on a regular basis for all detainees. All persons arriving in detention are associated with former detainees, without having carried out a covid-19 test beforehand. During our meals in the refectory, many of us are crammed together without any barrier measures being respected. We are therefore automatically exposed to possible risks of contagion.

2 – We are regularly exposed to repetitive noise pollution by calling the prisoners by name to introduce themselves, which can cause us serious psychological problems. There is a lack of sleep on the part of the detainees, who to avoid this noise are obliged to take sleeping pills to fall asleep.

As for food, it leaves something to be desired. The food they offer us is at the limit of its expiry date. The poor quality of the cooking is generally not up to scratch, which exposes us to serious risks of food poisoning. On top of that, the menus are repetitive.

3 – Every day, we are humiliated, insulted by the police and even physically attacked by them. They treat us indecently without taking into account our rights. It is considered that every human being has the right to live and be respected even in a prison. There is an abuse of power on their part.

4 – When we are presented to the judges, there are several files concerning many detainees that are not treated on the basis of good information. For example, dates of birth that are changed, which changes and falsifies their identities.

We are taken to the airport for masked flights without having met our consular authorities. Even when we are presented there, they often issue us passes that the border police at the airport do not even show us. It can be said that we often even have doubts about the existence of these documents, which they also claim to have.

5 – At the moment we are going through a second phase of reconfinement. On the restrictions linked to this presidential decision, we feel that we are not safe here because the virus makes no distinction between men who are in administrative order and those who are “without papers””.”