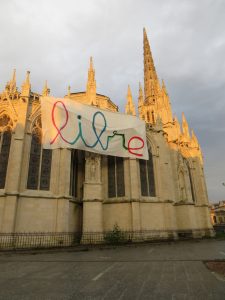 Prisoners denounce their situation when 11 people tested positive at Covid-19.

Hello. My name is X. I’ve been at the Lyon-Saint-Exupéry detention centre for 25 days. The thing is, it’s going to be bad every day. The people who have caught the coronavirus here, there are already 11 positive people. And today this morning we woke up, they took two people to isolation. They slept next to us and everything. And now we are asking for the right to talk to the police, to talk to people, to tell them outside that there is coronavirus here. There are no sanitary means, nothing, and freedom, nothing. The policeman told me that we don’t give a damn. He told me “I work here for 8 hours, then I leave and I don’t give a damn about what happens here”. The hunger strike, it’s been three days, no one came to see us, no one spoke about us, no one spoke about us, no one… at all.

I personally have three French kids, my French wife, I work. I’m on a permanent contract and everything. and now they’re taking me back here to the detention centre, they haven’t released me, I don’t know why.

I don’t know why. It’s getting too complicated. Some people here… if I didn’t have my children, I would think about committing suicide here. A lot of people here think about it too.

And that’s going to complicate things, it’s complicated. We’ve been on hunger strike for three days now, there are four people in their rooms. Some people don’t come out of their rooms. We’ve been waiting for people from outside to help us. Please. And nobody helped us, apart from the journalists, apart from you, apart from the newspapers, apart from nobody. And there are no rights to see the family, there are no visits. We don’t have any visitors, we don’t have the right to see the family, we don’t have the right to see people from outside, there’s nobody. And on top of that, we do the papers here to make the appeal, to call the lawyer, they didn’t want to. The phone booth, the landline. When there are people, they don’t have a phone here to call the outside world or their family members, there is no phone booth. The phone booth doesn’t work. Here you go, please help us.

We are 127 people in the Lyon-Saint-Exupéry detention centre. There are handicapped people. There are people who caught the coronavirus a week ago and they are here with us. They took them to isolation, they came out positive, they leave them in our room, with us. There are no sanitary facilities. There are no masks, they don’t give masks. They don’t give us sanitary products to wash our hands, there’s nothing for that. You put them on your hair, you don’t know if you’ve used shampoo or water. Besides, we don’t have any rights at all. We feel that we are… it’s not France… it’s France that says liberty, equality, fraternity? We don’t see that. In truth we don’t see that.

The association, apart from Forum during the day when you come back home, they give you the paper, the rules from there, he says bring me the paper because tomorrow you go to the judge blabla After tomorrow, after I don’t know what, there’s nothing, it’s fine. They don’t help us. We’re not even allowed to make a photocopy.

I’ve been asking for an appointment with the doctor for four days, there’s no room. They tell me the doctor accepts that the people who came back today, the new ones. He doesn’t accept the old ones. I said I’m old, I’m new, it’s the same thing! I’m sick. I said I’m sick, I’ve been coughing, it’s been three days, my throat… the people with the coronavirus, they were with me, I’m sick. They don’t give me an appointment, no. They don’t speak to me well, even the doctor here doesn’t speak well, he tells me we don’t have that, we don’t have that. If you speak badly with him he will call the police. The police will take you to solitary confinement.

The social workers here don’t do anything. There’s no.
I’ve had a cough for three days. They don’t give any medicine. I said I wouldn’t go to the doctor but just give me some cough medicine. That I buy myself. They tell me no, you’re not outside, you’re in the centre.

Usually we have the right to visit for half an hour a day, each person. And the policemen say no, we don’t do visits like that, they don’t work much. They say there is a paper, from the judge I don’t know what, that says they have stopped the visits. I said show us the paper! show us the paper that forbids visits, we’ll have a look. we’ll read it, I’ll read it, I believe my eyes, give me the paper, I’ll have a look. if there are no visits, ok. if you tell me the judge has sent the papers that there are no visits in relation to covid 19, you won’t show us the paper, how come. He says “no I don’t show you the papers”. You know, one group of police officers leave the visit, and the other group doesn’t leave the visit. One group leaves the visit, the other group doesn’t leave the visit. It’s up to them. That means if they are not happy with the visit, if they are in their right mind and everything they leave the visit.

There are no evictions at the moment. The Algerian, Tunisian, Moroccan borders: closed. The borders are closed. Only Albanian people are expelled here. But for us, the borders are closed. I have the right to go out. I have all the papers to go out. I have my residence permit which is valid. I have all that. Why don’t they release us? They bring you back here to open the centre, to get the policemen working and to give food, to pay the other countries. Because it’s the foreigners who pay for the clothes, the towels, it’s them who pay. Here they say that if we close the centre we’ll be in trouble or… the goods won’t work, blablbla… it’s political. It’s political. […]

We’re going to count on you for the moment. there are 11 people who are positive here. if they bring in people from outside, I swear the centre will be closed. Because they have no right to keep us like this. On my children’s heads, there are a lot of positive people here. I swear. I don’t swear on the heads of my children for nothing. […]

Married with a French woman, three French kids. My children, all French. I have pay slips, I work in a factory. And I’m here. There are people with papers and they’re here. They’ve done anything, I don’t know what they’re looking for. […]

We’ve been on hunger strike for three days, we haven’t eaten, some people have fainted and everything. The police told them to go and eat, they said “I prefer death, I don’t eat”. “I prefer death”. They cut you, they hit you, they talk badly to you. If you talk badly, if you answer, the police cut you, but you don’t have the right to answer. if you answer, you go to solitary confinement. It’s not all of them, even the world, it’s not all bad, it’s not all good. but here 98% of the people in this centre do all the work they do, they’re bad to us. imagine, I’m in bed, I think about my children, my wife, to see them, to go out, at least for the visit. there’s a policeman in the evening, he comes to see me, he says “give me your card, dirty whore”.