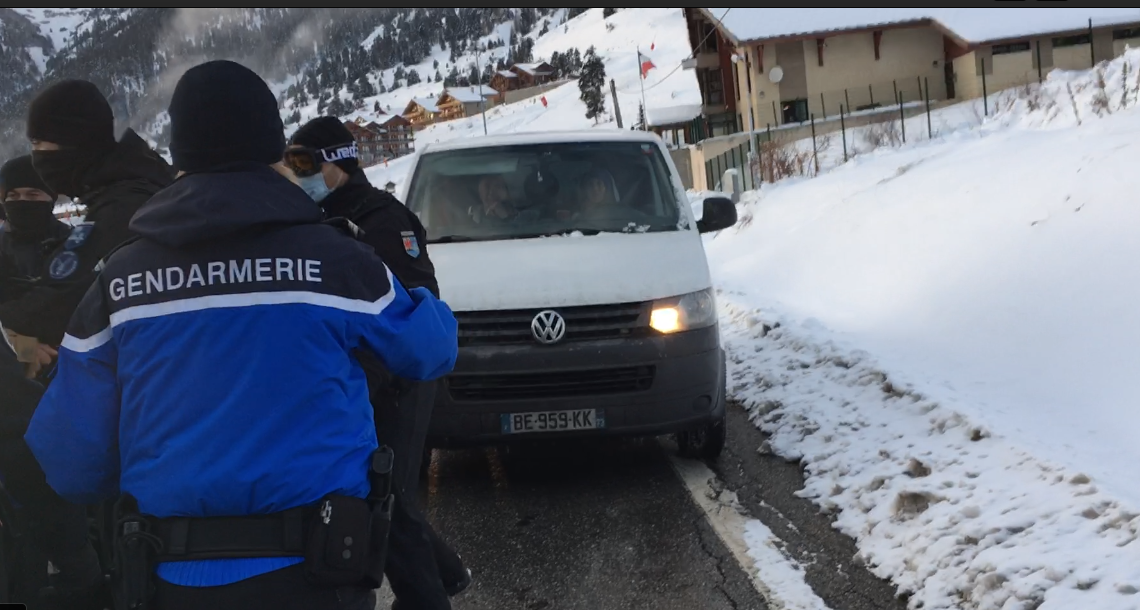 HAPPY BIRTHDAY TO US

On 11 December, the self-managed Chez JesOulx Refugee called for a walk on the French-Italian border, to underline its oppressive presence and the massive deployment of police to guard the area, a daily theatre of forced rejections.
Under the persistent gaze of Digos and police, we crossed the snowy border and approached the PAF, where a self-styled institutional event was taking place, attended by migrant aid NGOs, journalists, senators and MEPs. This pompous presence did not prevent the capture of 25 people travelling, including families with children, elderly people and pregnant women: 20 people arrived at the PAF, the remaining 5 were stopped shortly after Claviere and sent back to Oulx.
In a fit of rage at the umpteenth injustice, we blocked the PAF and road transit so that these people could be freed, amidst the arrogance and shoving of the Gendarmerie and border police.
It was only after a couple of hours that they began to be escorted out and handed over to Medicine du Monde vehicles, and then taken to Briançon. From later communications, we learned that no fingerprints were asked for and no documents were signed. In a couple of cases, they were transported outside on improvised firemen’s stretchers, a sign that their health conditions were precarious and certainly not suitable for a detention of many hours inside a detention facility. In addition, one of the pregnant women was denied direct access to the hospital and prevented from boarding the Maraude cars (cars belonging to the associations Medicine du Monde and Tous Migrants in charge of rescuing people).
Of the people who were detained at the border station for several hours, most were released, while the others were sent back to Italy, despite Medicine du Monde’s assurances that they would be taken care of. 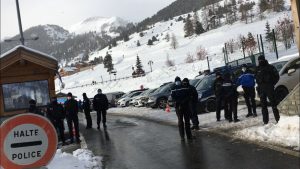 At the end of the day, after 4 hours of garrison, the reinforcements of the police arrived, forcing the group of solidarity activists to leave and to break the blockade, with some people still detained inside the premises, then sent back to Italy.
This is just one example of what happens daily at the border and beyond. The answer to this inhuman system cannot be the charitable offer, which is part of this murderous mechanism, nor the deployment of more and more police: once again the answer must be the total elimination of all borders (existing only for people and certainly not for capital) and the deprivations of freedom that result, as well as the endless bureaucratic maze that undermines the “right” to live in a territory.
As long as there are people forced into a life of deprivation because of a piece of paper, risking imprisonment (Detention center) just for being unwanted by the state power, as long as there are concentration centres called reception centres that dehumanise and infantilise, you will find us in our places.

Our homeland is the whole world.
Our law is freedom.
No border No nation