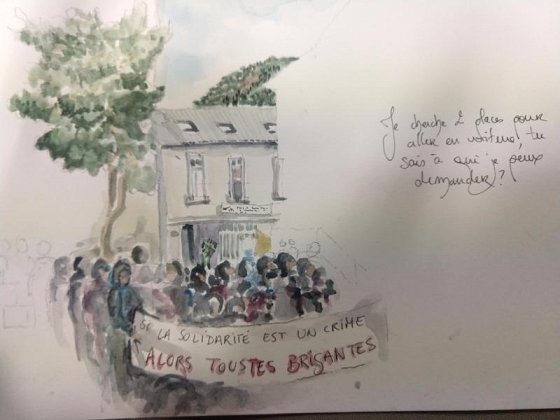 25/07 at 23:00 ] Return on the day of the march of Sunday between Val Clarée and Briançon. The Caravana is currently in Gap. Come and join us, we will post all the important information on the Vallées en lutte website.

The march left at 3.30pm from the Val Clarée camp, passing through the village of La Vachette where speeches were made. The demonstration then crossed the national road and blocked it to reach a path. On arrival at the Champ Mars in Briançon, the Fanfare Invisible brass band of the hautes-alpes joined the procession.

In terms of police presence, the PGHM helicopter [1] began its rotations as soon as the demonstration started. In Briançon, CRS and mobile gendarmes were posted at all the entrances to the town centre to prevent demonstrators from entering.

During the demonstration, there were moments of tension when the march tried to enter the town centre. The march was forced to bypass the whole centre, before managing to reach the solidarity shelter, close to the train station. 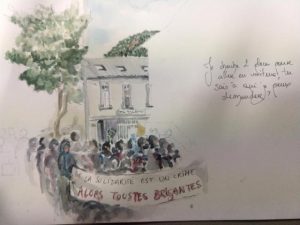 The GMs [2] liberally gassed the march, but no arrests were made. The demonstration arrived at the squat Chez Roger in Gap, where an evening of pizza and concerts began.

Currently a strong police presence is deployed in Gap, with companies of CRS in different parts of the city. 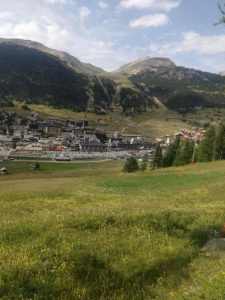 After the dismantling of the camp this morning and a legal briefing, the snacks for the walk were distributed. The start was given at 1.30 pm for the walk. During this time trucks carrying camp equipment and bags left. Some of them had been either checked, searched at border crossings. The march of more than 400 people took six hours, passing through the mountain paths above the golf course. The march remained grouped on the paths. It was followed by mobile gendarmes below, along the golf course. A helicopter from the PGHM (Peloton de Gendarmerie de Haute Montagne) monitored the event throughout the afternoon, making regular rotations.

The march arrived at its destination, blocking the main road for some time while the long line of people crossed it. The march arrived at Les Alberts at 7.30pm. The people who arrived earlier to set up the camp were checked again at the entrance to the Clarée.

The camp is now well set up and will leave tomorrow at 1.30 pm in the direction of Briançon, for a new day of walking. 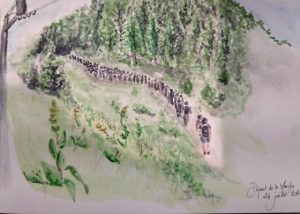 – Dismantling of the camp and march to Briançon
– Evening rap concert at Roger’s, cours du Vieux Moulin in Gap 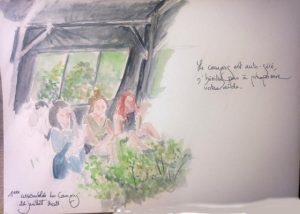 Around 300 people, some of them coming from far away, are swarming around the camp. All day long discussions took place:

– digital security, about the dangers of surveillance on phones
– exchange of information and practices around the struggles against detention centres. For more information, see for France https://abaslescra.noblogs.org and https://crametoncralyon.noblogs.org, for Italy https://nocprtorino.noblogs.org/ and for Belgium https://gettingthevoiceout.org. 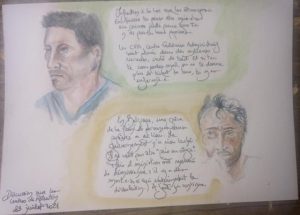 – Workshops on burn out in activism (facebook: consultoria autogestita torino).

– presentation about border contexts and struggles in different European geographies.

A concert is being prepared for this evening. 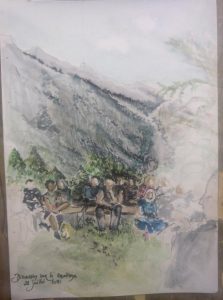 Join us tomorrow before 11am for the start of the march! Don’t forget your good shoes and your water bottles! And thank you to the canteens who are cooking up some great food for us!

The cops have passed several times near the camp and are randomly checking in Oulx and Claviere, by car or on foot. 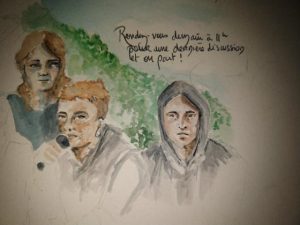 Programme of the day on SATURDAY 24th

[Thursday 22]The police are in the village; for the moment they are not stopping. It is even possible to park in the village and walk up.

– 8am Breakfast
– 10:30 Working table: Computer security by Hacklab of Turin and Criptoparty Geneva
– 10:30 Discussion: Combating administrative detention systems in France and Italy
– 13:00 Lunch
– 15:00 Working table: Care and well-being in the activist environment
– 15:00 Discussion: Exchange of reflections and practices on the fight against borders
– 8pm Dinner
– Followed by a concert of the BANDA PERIFERICO TERRANEO

THURSDAY 22ND
4pm: Assembly to present the campsite
6pm: Discussion with the comrades of Nodo Solidale on Zapatista Autonomy