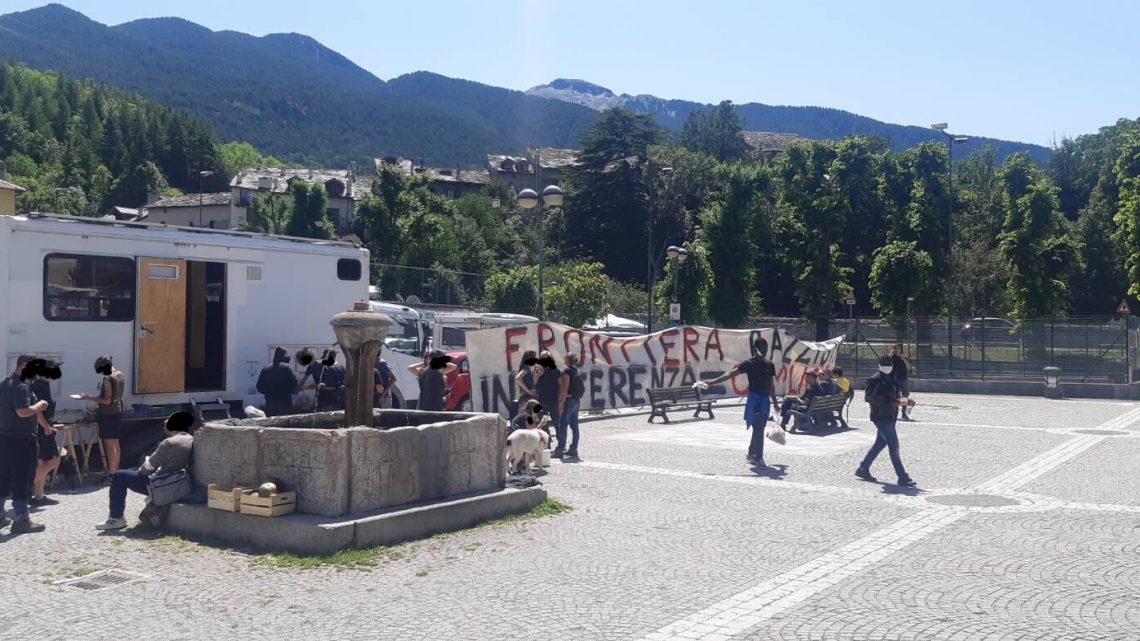 UPDATE FROM THE MONGINEVRO BORDER

On Thursday, August 5th, the Ex Occupied Customs Office of Claviere was evicted. The building had been occupied six days before by a large group of people who since then had been engaged in the construction of a self-organized solidarity refuge against the borders.
At about 5:30 a.m., while every access way to the village was blocked, carabinieri, police and digos started to break through the barricades of the door, a back window and the roof. Once again, the firefighters collaborated with the operations, helping to destroy the fortifications and allowing the guards to enter.
Meanwhile, at the resistant camping close to the occupation, the 12 people who were sleeping there were identified, and divided by their document. Those who had a european passport were denounced for occupation (art. 633 cp).
The six people (+1 that was in the occupied custom) who did not fall into this category were picked up by the Red Cross which, once again, provided its operational arm by helping with the expulsion operations.
Then, the six were taken to the Bardonecchia police station where they received a decree of expulsion from Italian territory and were left finally at the train station.
The eviction ended around 12.30 p.m. when the 31 people present in the building were forced to leave, receiving a complaint of occupation and damage (art. 633 and 639 bis cp). A convey then reached the sit in of solidarity formed in the center of the village from where everyone moved to the lower valley.
During the morning, cops and firemen forced the opening of some personal campers present in the parking lot, damaging them. The following day, the wooden structures of the garrison, which served as a shelter for those waiting to cross the border paths, were razed to the ground. For the umpteenth time, the state has attempted to annihilate self-managed spaces of political organization and direct solidarity. Those who fight against a racist system built to cancel people’s freedom and those who have been crossing many borders for years will continue to do so!
In the meantime in Oulx the situation is precipitating. In these days, the Italian police try to prevents people without documents at Oulx station from taking the bus to Claviere. Some were forced to board a train to Turin while others had to walk on foot to Claviere.
The Massi fraternity refuge, which is still waiting for the 180,000 euro promised by the prefecture, has little more than 40 beds, and it closes its doors during the day, from 9 to 17.30, leaving people on the street. On the evening of the eviction seven people were taken to Bussoleno, because the shelter had no more beds. Those taken to the various institutional centers dispersed in the upper or lower valley, will still have to reach Claviere, running into increasingly frequent checks on trains buses and in the streets.
European migratory policies are getting tougher, control and repression at the internal and external borders of Europe are increasing and, while the business of immigration is becoming more and more profitable, the welfare model fails.
The proposed law “New Pact On Migration and Asylum” of the European Union foresees the externalization of the borders and an increase in administrative detention. Numerous “pre screening centers” will be built, detention centers from which people will have to pass mandatorily before even reaching the external European borders. From here people will be divided according to nationality, the possibility to apply for asylum will be even more remote while deportation will become faster and faster. Even just arriving and moving in europe without a red passport will be more and more difficult.
Even today, the violence and racism of the states and of the border device manifests itself punctually at every eviction, at every push back, at every targeted control, at every detention in a CPR, at every deportation… And to answer and fight against all this, we will continue to build self-managed spaces open and accessible to all.