Yesterday, the Turin’s police arrested one of our comrades.
Emilio Scalzo, 66 years old, a historical activist of the No Tav movement, since the beginning has been involved in the fight at the border between the Valsusa and Briançonnese. He has always been in the front line to bring concrete solidarity to the thousands of people who have crossed this border, spending (moreover) endless nights at the transalpine passes.
Plainclothes guards waited for him outside his house to take him away as quickly and silently as possible. They snatched him off the street. For many hours no one heard from him: the principals knew how much the valley loved him and how he might react to being arrested. The arrest order is very unusual and innovative in its field: a European arrest warrant issued by the court of Gap with a request for extradition to France for a crime that has not yet been judged. The charge is aggravated violence and contempt for a demonstration that took place during the “Sconfiniamo la frontiera” camp in May 2021, an action in response to the eviction of the ChezJesoulx self-managed shelter. A demonstration, which, let us remember, was almost immediately attacked with tear gas and stun grenades by the French gendarmes, the same gendarmes who on those paths repel and exhaust the “without-the-good-document” people, forcing them to attempt increasingly dangerous and deadly paths.
This warrant is so far unique: an international arrest order with extradition request to carry out precautionary measures on a crime not yet judged is a completely new practice, one more piece in the perfection of state repression in the fight against borders and beyond. Perhaps it is the result of the increasingly close relations between the Gap and Turin prefectures, which have been evident over the last two years. The Turin Court has 14 days to grant or refuse
extradition. Let’s fight not to have him taken away!
They are trying to destroy the bonds of solidarity that are always concrete and strong on this border, by implementing the usual division between “good” and “bad”, as if to take revenge for the fact that the trial of the 3+4 of Briançon was for them (the court of Gap) a great failure. On both sides of the border, Emilio is not loved by police intelligence: in Italy he is one of the accused for the occupation of the self-managed refuge in Oulx, a trial that will begin in October; now in France they want to imprison him too.
He is now in the Vallette prison in Turin, where he will be for a fortnight while waiting for the answer on his extradition.
Let us not leave him alone! Let’s not allow him to be extradited!
We call for solidarity with all those who have worked or believed in this fight.
To write to him: Emilio Scalzo, Casa Circondariale Lorusso e Cutugno, via Maria Adelaide Aglietta 35, 101151, Torino (TO). (Telegrams are faster and safer to send).
Send us privately photos, writings or anything else to send to him.

We were all there on those paths!
Always against borders! 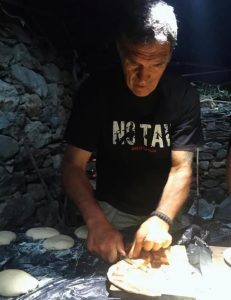