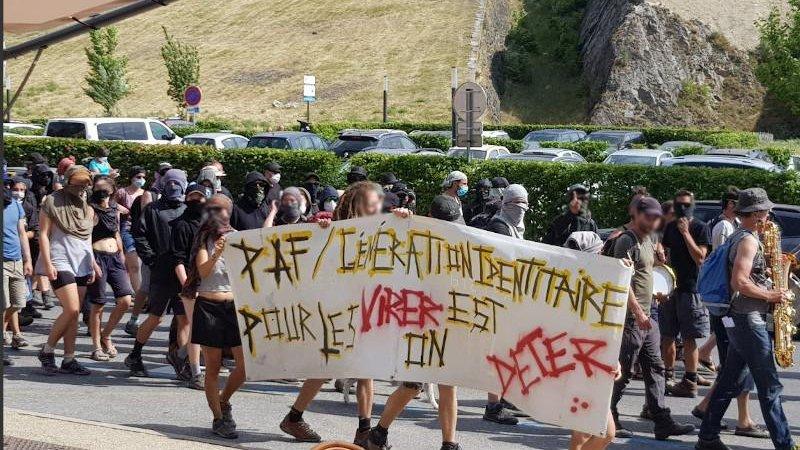 CALL FOR SUPPORT AND MOBILISATION BRIANCON

Published on 3 November 2021 on https://valleesenlutte.org/

Today, on November 2, 2021, the situation in the Briançon area is becoming increasingly complex.

The French-Italian border continues to be the scene of ever greater inequalities between exiles and Europeans.

While nearly 50 people cross this border every day, in the hope of being able to apply for asylum, sometimes in other European countries, the French state continues its methodical work of precariousness and confinement of undocumented people.

Every year for the past five years, the repressive arsenal has continued to increase, making the conditions of passage more and more dangerous.
Some local bus routes are modified, making the crossing more complex. Elsewhere, social or health services are forbidden to carry out their functions with exiles and logistical support is largely hindered, and raids are multiplying throughout France.

This state persecution of people who have been travelling, for some of them, for several years in extremely difficult conditions is causing numerous tensions and difficulties both in Italy and in France, in a context that was already not easy to resolve.
The Prefecture, by meticulously preventing people from moving freely, feeds and crystallises tensions that only serve to legitimise a racist and xenophobic discourse that does not lack relays.

In this extremely tense context, the Briançon solidarity refuge temporarily stopped welcoming exiles on the evening of 24/10/21, citing a lack of security and dignity for the people welcomed there. This attempt at a “balance of power” with the French state, while waiting for the opening of a second emergency reception centre run by the state, resulted in the occupation of the Briançon train station and an empty community hall. The only response from the authorities was the evacuation of these places and once again the arrival of nearly 200 additional mobile gendarmes in the Briançon area as well as 10 additional agents at the border police in Montgenèvre, bringing the number of repressive personnel to nearly 400.
Many people continue to try their luck on these paths. The tracking in the mountains, once again reinforced by ever more sophisticated human and technological means, will inevitably contribute to pushing the exiles to take even more risks.

We, self-organised solidarity people, collectives and associations of the Briançonnais, launch an urgent appeal to mobilise activists as soon as possible to

1- Continue to organize an emergency solidarity on the basic needs of the exiles who arrive in Briançon, inform these people, relay information and be present in front of the non-respect of the rights of the exiles by the police.

2- Organise day and night duty, with a view to the next reopening of the refuge (and/or a second emergency shelter): security of the people received, various logistical matters and links with the marauding in the mountains.

3- Everywhere on the territory, welcome, inform and support undocumented people.

4- A demonstration will take place in Briançon on 13 November 2021, meeting point at 2pm in front of the media library.

All your skills and motivations are welcome, our energy is not infinite.

AGAINST THE RACIST POLICIES OF THE STATE AND ITS BORDERS, LET’S MOBILIZE !!!!!

CategoryEvents News from the outside