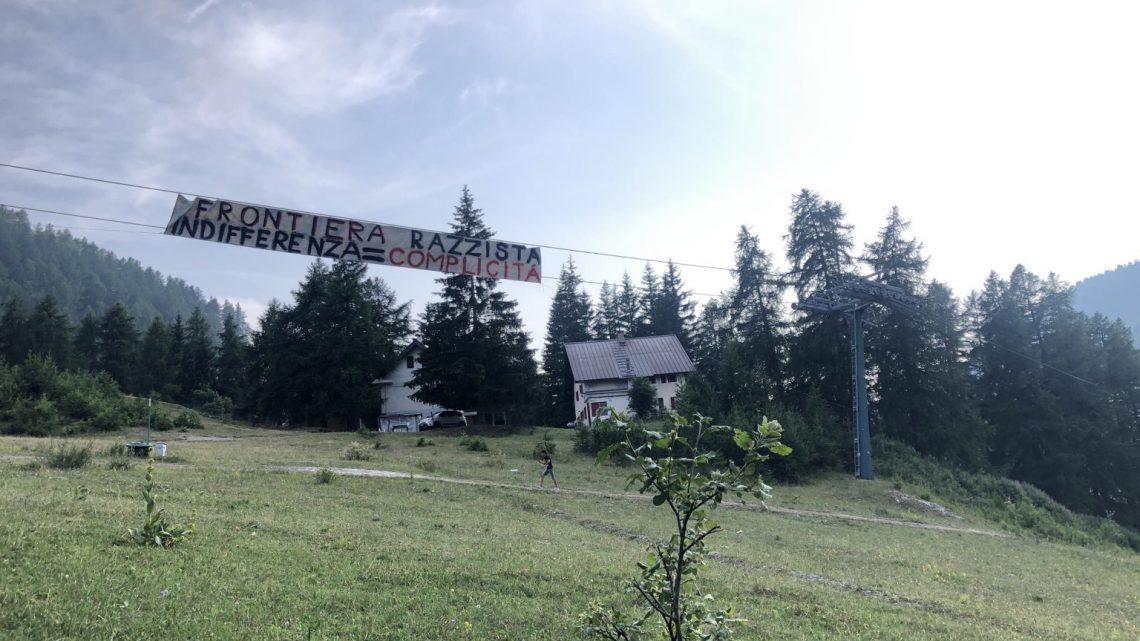 NEWS FROM THE MONTGENEVRE BORDER

With the arrival of the first snow, the situation in the border is becoming more and more difficult and risky. But it is the repression and the border controls that make the journey a death threat for those trying to cross the mountains.
Just a few weeks after the beginning of the tourist season and a month after the last eviction, the municipalities of the Upper Susa Valley are cleaning their faces (and the walls) and continue to make invisible, remove and push back those that might ruin the image that has been created for those with the wallets full of money to spend on the skiing pistes.
By now every hidden angle in Claviere has become a small resting place full of abandoned blankets, back packs and the remains of camp fires that people use to stay warm.

The mobile unit of the Gendarmerie of Briancon has been augmented by 200, and 10 new border cops have been recruited in order to hunt people on the mountain paths.
This enormous and murderous deployment, set up by the prefecture of GAP with the aim of preventing the transit of everyone who does not have the right document, forces people on ever higher more dangerous paths, some of which are impassable in this time of the year.
Last Sunday, eight people have been rescued by the french alpine rescue in the area of the Monte Janus and brought to the hospital of Briancon in a state of hypothermia, while other two people who got lost have been found later.
The people that get blocked on the paths are then held for hours inside the premises of the PAF without food and are undergoing ever more invasive controls, one of which is the systematic confiscation of their phones.
On the Italian side, since one month, every day civil cops are present at the bus stop in Oulx and are then following the bus until its arrival in Claviere. There they control and identify everyone who tries to be in solidarity with people on the move: this way the state tries to intimidate everyone who in person tries to oppose the apparatus of the border.
The shelter Fraternità Massi in Oulx is packed with people (it has capacity for 40 people) and increasingly has to lean on the Red Cross of Bussoleno in order to find space for people during the night.

It is getting more and more difficult to reach Claviere due to regulations set up by the bus companies that connect Oulx and Claviere.
The buses of the french company Resalp continue to not serve the stops of Cesana and Claviere (until at least 15th December), while the Italian company Sadem recently suspended one of the last two remaining buses in direction of Claviere, the one at 10:45 (the one at 13:00 is only a school bus). The people on the move are forced to reach the last village before the border by foot, doubling the kilometers they have to walk.

In the meantime, the shelter Les Terraces Solidarires in Briancon has closed its doors, declaring that they were not anymore able to sustain the overcrowded situation of the building.
The overcrowding is partly connected to the French management of the pandemic. A law that has been passed on August 5th, requires a health pass for taking inter-regional trains or buses.
Thus, those who do not have the possibility to get vaccinated or who do not have the money to pay for a Covid test, can not leave. In Briancon, the people therefore have to wait in order to get a free test, that is offered in Briancon by the association Medecins di Monde.
Currently, those that manage to escape the controls on the mountain paths and arrive in the city are housed in one of two big tents set up outside of the church of St Caterina that the priest has temporarily granted.

On this line of border that is getting ever more racist and militarized, the necessity of creating self managed spaces in which we can organize outside of the logic of institutionalized charity and against the repressive border machinery becomes evident.

AGAINST EVERY BORDER
FREEDOM