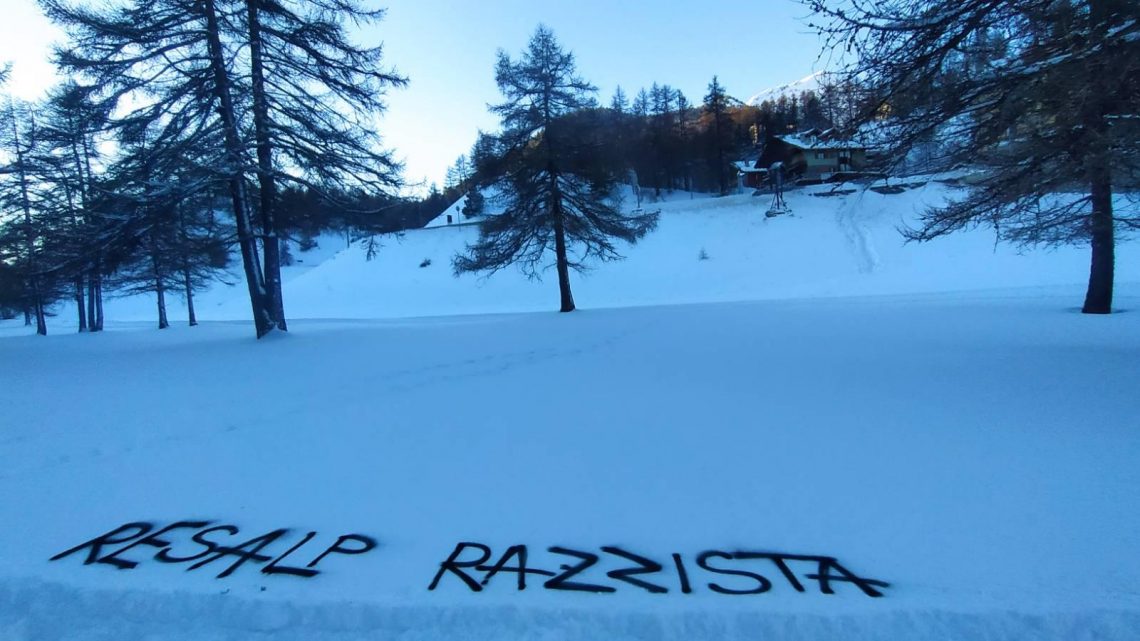 RESALP, A COMPANY THAT SELECT ITS PASSENGERS AND THAT HELPS THE BORDER GUARDS ON BOTH SIDES OF THE BORDER.

Resalp is a french transportation company that runs the bus line connecting Italy and France from Oulx (TO) to Briançon.
Since years, every day, this line is used by dozens of people that don’t have the documents in order to pass the border “legally”. Many leave with the bus from Oulx and arrive in Claviere, the last Italian village, and then attempt to cross the border by foot on the mountain paths. Between the forest and the skiing pistes the French border police (PAF) pushes back everyone, that doesn’t appear to be a tourist.

How can we call this passing of information if not a form of denunciation? Not to speak of the humiliating and discriminating treatment by some of the bus drivers towards people on the move, that even prohibit some people to get on the bus discriminating based on racist and classicist criteria. Frequently, at the bus station in Oulx, the drivers don’t open the doors of the buses until the arrival of the TGV, leaving dozens of people without documents that fill the bus every day outside until the “first class” passengers get on board.

However, since 1st October 2021, Resalp suspended the bus stops in Cesana and Claviere as well as the access to the bus without a pre-reservation online. This procedure will continue until at least 15th December, namely until the beginning of the skiing season and the arrival of the tourists. Already in March 2020, Resalp completely suspended all the cross-border lines. We are wondering if these measures are related to the Covid pandemic – as the company claims – or if there is a border and a silent collaboration with its guards involved.

Now that the buses have been diverted, it happens always more frequently that groups of people find themselves forced to walk between Cesana and Claviere thereby prolonging their already long journey for another 7 km. Obviously during the winter months this is very dangerous.

But Resalp doesn’t want to see all of this, and calculates only on those passengers armed with a document, Sanitary Pass and maybe a reservation that is linked to the TGV ticket. Their cross-border bus lines seem to be exclusively for those that can afford a high speed train ticket and/or those that have documents.

Last Saturday, on Dicember 4th , a bus run by the company Resalp that was going towards Oulx in order to pick up passengers of the TGV, has been stopped by a demonstration against the border and their repressive strategies that blocked the main street towards Monginevro, a couple of meters from the border. The French gendarmerie in full riot gear have allowed the bus to pass their lines. The driver tried to force his way through the blockade continuing to drive forward despite a dozen of persons that resisted with their bodies, risking to run them over. The gendarmerie fired tear gas and tried to charge at the demonstration, stopping only few meters away. On the bus there were five tourists that, once they understood that the bus would not continue, took their skis and trolleys and continued towards Claviere on foot. The driver was convinced to take the empty bus back to Monginevro.
On this border, where normally those who don’t have the right document are forced to walk on foot on the mountain paths while the flow of tourists and commodities continues to move, at least this time things went the differently.

Since 2018 Resalp selects its passengers with the political decisions they take, discriminating people without documents that cross this border. Today, thanks to the Covid related laws that legitimize all of this, this exclusion becomes even more evident.

The problem is not the low influx of tourists and TGV passengers and neither the pandemic.
The problem is the border and its guards. Resalp is complicit in this device that selects and then controls and pushes back.
Resalp and the tourism industry that exploits this territory are complicit. 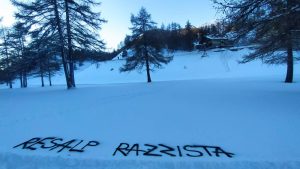