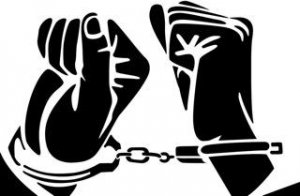 ACTION AGAINST THE OVERTURE OF THE NEW DETETION CENTER IN LYON

This Monday 17 January 2022 is the official opening of the new CRA (administrative detention centre) in Lyon, next to Saint-Exupéry airport, as well as the transfer of prisoners from the old CRA to it. In order not to let the state organise its policy of confinement in silence, we decided to make the opening of the new CRA visible and to disrupt the transfer in support of the prisoners.

For months, the opening of a new detention centre has been done in total media silence, while it constitutes another element in the repression of people considered as undocumented, and in the racist and criminal migration policy of the French state.

In 2019 the Macron government announced the construction of 3 new CRAs (in Lyon, Bordeaux and Olivet near Orléans).

These are the first new CRAs to be built in almost 10 years, but in recent years hundreds of new places have been created, the occupancy rates of the CRAs have continued to increase (enlargement, extension, renovation) and new projects are already underway. 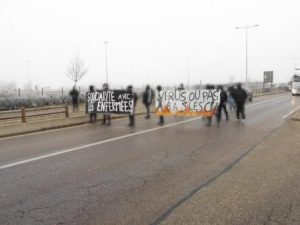 The objective of the state is clear: to increase the capacity of detention even if it means spending millions of euros to criminalise, torture and expel people who, according to the French state, do not have the right papers. The CRAs, CPRs, closed centres and similar facilities are thus one of the links in the repressive chain against undocumented migrants. They are the immediate continuation of the raids in transit areas and working-class neighbourhoods, the other side of the organisation of non-reception and the direct extension of police violence against exiles, whether in the camps in Calais or elsewhere. The prison machine completes the arsenal of refoulement policies, which are becoming increasingly sophisticated and criminal through the militarisation and externalisation of borders.

The current electoral context, saturated by the slogans of the extreme right, reinforces and legitimises even more than usual the state’s racist and security-oriented discourse. The Islamophobic overbidding, the myth of an “enemy from within” and the trivialisation of replacement theories, broadcast incessantly on the main stream media, offer a favourable ground for the hardening of migration policies and encourage the government to multiply racist measures and the persecution of exiles.

Work on the new Lyon detention center began in spring 2020. It is located on the Lyon Saint Exupéry airport site, very close to the existing CRA. Its capacity is 140 places in addition to the 140 places already in existence. 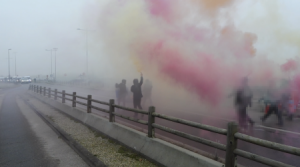 The detention center’ system is a real business for a number of private companies and associations who make money from the construction, management and maintenance of this prison. The new CRA cost the state more than 20 million euros, which went into the pockets of the construction giant Eiffage.

Currently, in addition to the daily violence suffered by the prisoners, there is also the fear and insecurity linked to the health context (promiscuity, no barriers, no access to care). Indeed, the Lyon CRA has been a real cluster since the beginning of December. For a few weeks now, it has officially been used as a “CRA-Covid” and prisoners from all over France who have tested positive are transferred there.

Let’s inform ourselves, let’s not let this opening remain silent.

DOWN WITH THE CRA!

DOWN WITH THE BORDERS!