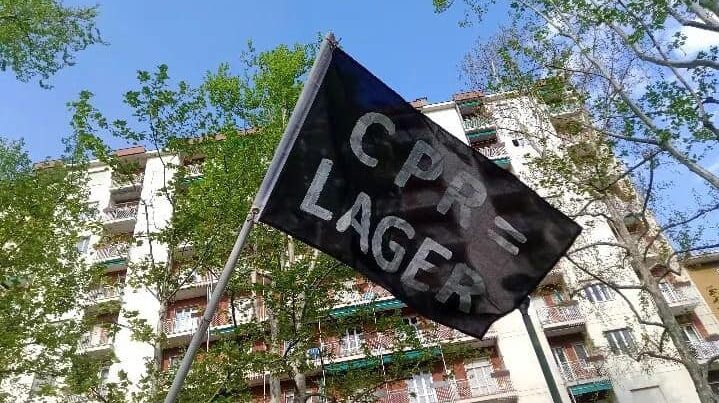 UPDATE OF 28 AND 29/04/2022 FROM THE DETENTION CENTER OF TURIN – No CPR Torino
In the CPR (detention center for people without documents) of Corso Brunelleschi the protests continue.

From the White area they tell us that they are 40 out of a maximum of 35 beds. In this area – where mainly Tunisian people are imprisoned – there is a succession of entrances and exits for repatriation purposes (for more information see “How deportation works” and “Deportations with Tunisia continue“) against which the rebellions are not slow in making themselves heard. Yesterday morning around 4:00 a person detained in the Yellow area was forcibly taken to be deported generating in the whole centre a strong protest that gave voice to the anger against the apparatus that manages the CPR, against those who imprison and repatriate people just for not having the “right” document. There was a strong solidarity expressed with the deported person who in that moment was suffering the oppression and totalitarian violence of the state. Some people tried to stop the deportation by swallowing razor blades, batteries and glass.

We have often pointed out what kind of instrument health care is in these centres, both for those who have the upper hand, but also for those who revolt and use every means at their disposal in an attempt to turn the situation around and self-determine their freedom (“APPROFONDIMENTO SUL SANITÀ AL INTERNO DEL CPR DI TORINO” and “Brochure: Riflessioni sulla gestione sanitaria all’interno del CPR“). Precisely for these reasons, 7 days ago, a detainee from the White Area attempted suicide. The inspector intervened and cut the rope, causing the boy to fall and suffer severe facial trauma. The person was transferred to the infirmary where he is practically in isolation. He has been on hunger strike for 7 days and yesterday news arrived that he has started a thirst strike; his request is to leave the CPR.

We learned that at 4:00 am four inmates, including probably the person on hunger and thirst strike, were returned from the centre. This is how the brutality of the migration control system is expressed once again. No matter what the psycho-physical condition and tension of those trying to cross the borders, the only interest lies in feeding the profitable detention and deportation machine.

We reiterate our complicity with those who rebel inside the CPRs.

The fight does not stop outside and inside the walls.

SOLIDARITY WITH INMATES ON HUNGER AND THIRST STRIKE.

UPDATE OF 26/04/2022 – No CPR Turin
Yesterday, during the solidarity presidium at the Centre for Repatriation in Corso Brunelleschi, after repeating several times the number of the phone we use to hear the inmates, two people called us from inside.

A Tunisian boy detained in the Green area told us about the conditions they live daily in the centre. With respect to the state of the areas, the supply of expired food, the possibility to communicate with the outside, nothing has changed with the takeover of ORS. From the words of those who called us, we know that the previous day many inmates were ill, some were even taken to hospital, because the only meal provided was rotten and poisoned (Ramadan is in progress). Inmates also continue to have difficulty in communicating with relatives (telephone cards for foreign countries cost € 5 and allow 8 minutes) and lawyers: it seems that these days videoconferences with the defenders have been suspended. Moreover, a few days ago, it seems that several people left the White Area, probably to be repatriated. The second person who contacted us in the Blue area told us about his physical problems, which were totally ignored and silenced by the centre’s infirmary. This is one of the many dramatic situations in which much-needed care is systematically denied. As in prisons, there is no possibility of receiving adequate health care for more or less serious problems.

A very brief reflection on the management of these places: the new company managing ORS is in absolute continuity with the old GEPSA, which for years had the contract for the Turin centre. This continuity simply represents the interests of those who take charge of these places: profit. Those who profit and speculate on the lives of shut-ins have no interest in the well-being or health of those who are shut in. No change in the management of these places can lead to an improvement in the living conditions of those who are incarcerated. The only possible improvement is the destruction of the CPRs.