A NEW SELF-MENAGED SHELTER IS BORN!

In almost a year since the last eviction of the Casa Cantoniera in Claviere, we stayed here, in this valley, on this bloody and racist border, close to the people who challenge and overcome it every day, despite being forced to do so “illegally”: controlled, rejected and violated by the state and its armed forces. In the same valley where thousands of “migrants” with “the good papers”, called turists, transit undisturbated. In the same valley where only in January this year the border killed two people, Fatallah Belhafif and Ullah Rezwan.

As of today, we return to organize in a place that has been abandoned for decades, which now belongs to nobody but lives thanks to the people who inhabit, build and self-manage it, in opposition to one and all states and laws that would like to repress any form of collective and individual autonomy.

We have continued and will continue to struggle by reappropriating and building free and inclusive spaces. Places untethered from the violent, racist and infantilizing dynamics proper to the institutions, manifested on the French-Italian border in the Western Alps, in the Massi Refuge in Oulx, in the Red Cross (which participates in rejections in cooperation with the police) and in the Italian and French control and repression apparatus*.

We remained here, organizing on this border, not to carry out humanitarian and welfarist work FOR the “migrants,” but as a political choice to stand and fight WITH the people who transit through these valleys.

Today, more than ever, there is a racialization of welcoming and “solidarity.” Since the beginning of the war, associations, individuals, municipalities, states and the media have focused their actions, time and funds on ucrainian refugees. So we ask: does this solidarity exist because the people in question are white? Or because they are Christian?
We have chosen to fight with all victims of war and imperialism.

It is natural that fighting against oppressions does not prevent their reproduction. We keep in mind the violence that occurred in the Casa Cantoniera of Oulx  and we will try to live and create a space that attempts to deconstruct and manage violence.

This new refuge is not born in barren land, but in a valley (the Susa Valley) that has been resisting for decades fighting for the preservation and reappropriation of its lands against the shameful HST project and the world in which it is inscribed. A world of industry, unnecessary large-scale works and destruction of the environment in which we live, a world that pushes more and more people into exile.

🔥Around 20 digos are already here checking the area. We call all comrades to support and show them that here we will stay and here we’ll resist.🔥

SHARED DINNER THIS EVENING from 7 pm.
The place is in CESANA, the address is: via GIOVANNI BATTISTA ARMAND, 18 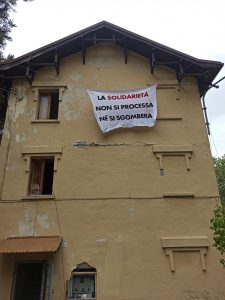