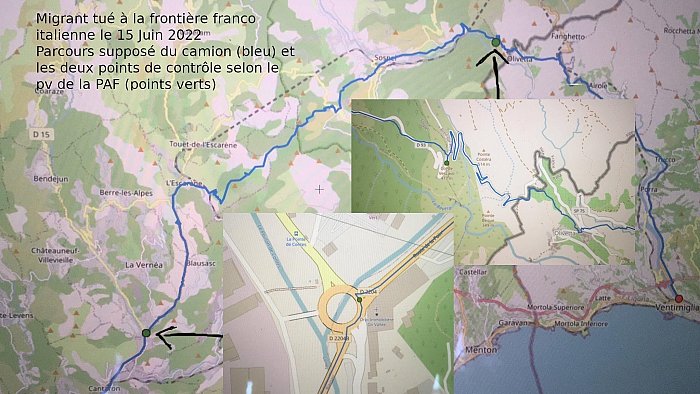 Val Roya. Another murder by the police, another violence for the border.

On 16 June 2022, a man died as a result of a head injury caused by a police shooting. The underlying reason was that there were undocumented people in the vehicle and the driver refused to comply.

On 16 June 2022, a man died as a result of a head injury caused by a police shooting. Apart from a few press articles, what happened at the French-Italian border on 15 June 2022 went unnoticed. However, it is part of a series of similar episodes and the debate they have provoked on the use of violence by the police in response to motorists’ refusal to comply.

According to a statement from the Nice public prosecutor, the PAF (border police) received a report from their Italian counterparts of a van carrying illegal immigrants, heading from the Roya Valley to Nice, via Fanghetto (Italy) and Sospel (France). This is one of the well-known transit routes in the area. In the report of the investigation (which we were able to consult), the PAF admits that the control carried out that night was carried out in the context of the reintroduction of controls at the internal borders of the Schengen area (see below). Spotted earlier, the van refused to comply a first time between Fanghetto and Sospel, on a winding pass road. A 40 kilometre chase on winding mountain roads then began. At Cantaron, in the heights of Nice, the police again tried to block the road, and it was there that, as the driver forced his way through again, the police fired four shots in self-defence. One of the people in the back of the van was shot in the head. The van continued to flee, followed as far as the Moulins district in Nice (about 20 km further along the motorway) where the vehicle was abandoned and the driver and two people sitting in the front seat fled. The injured man and 4 other passengers were found on the spot by the police. Two bullet holes in the front lights and the wheels were found by the prosecutor, one of which pierced the bodywork. As a result, the seriously injured man (and another slightly injured man in a state of shock) was transported to hospital where he succumbed to his injuries the following day. While the injured man was dying in hospital, the other passengers were arrested and taken to the Centre de Rétention Administrative (CRA) in Nice.
The next day, on 17 June 2022, despite the decision of the Judge of Freedom and Detention (JLD) to release them, the Prosecutor persisted in appealing against the decision, thus prolonging the double punishment inflicted on the victims, who were still in shock. They now risk a month’s detention followed by deportation.

In 2015, France unilaterally suspended the application of the Schengen Border Code, first for the formal reason of COP21, then for anti-terrorism reasons (following the Bataclan). Since 2020, the coronavirus is the latest argument to reinforce the myth of a border that is impervious to all the world’s ills. But in reality, the inhabitants of the territory know very well that the device targets much more than terrorism or Covid. In practice, it targets exiles arriving from Italy. This is what forces them to find other, more dangerous or costly routes, and what explains the proliferation of smugglers at the French-Italian border. Although the Schengen Borders Code allows Member States to reintroduce systematic controls at their internal borders, this measure may not exceed a period of 2 years according to the same code. France has maintained these controls from 2015 to the present. The operation that led to the death of a migrant is therefore illegal under European law, as the Court of Justice of the European Union (CJEU) recalled on 26 April.

Given that it has been going on for five years, it is not surprising that this type of control, which is illegal under European law, remains unquestioned in public opinion. Similarly, it is not surprising that the degree of violence shown by the PAF was not measured against the initial offence of which they were warned from the start by their Italian counterparts: aiding illegal entry and residence. The police therefore used firearms on at least four occasions for what was, after all, a “banal” offence.

Is it any wonder that such violence at our border does not shock anyone? This is not the first time that an exile has died from police bullets at this border. In 1995, Todor, a Bosnian child, was killed, again in Sospel and in similar conditions. At the time, it caused a great stir. If this is the second time that an exile has died directly from police bullets, no less than 47 people have died trying to cross the French-Italian border since 2015. So yes, it seems that what was shocking yesterday has become commonplace.

This tragedy is yet another reminder that the police kill, and that they kill with impunity. The parallels with the succession of recent cases involving the use of firearms in the face of refusal to comply are obvious. One thinks of the Pont neuf affair, the murder of Souheil last August in the 3rd arrondissement of Marseille, the recent murder of Raiana, or what happened again in the same district of the 18th arrondissement of Paris on 17 June.

In all these cases, a driver’s refusal to comply seems to have been sufficient to justify, in the eyes of the shooters, the justice system, the press and part of public opinion, the “proportionate” use of force: an uninterrupted volley of live ammunition. In all these cases, it is therefore not clear how the drivers could have both ‘rammed the police vehicle’ and ‘fled’. Either the police vehicle should have been hit, or in the case of flight, self-defence is not justified. In other words, the police officers’ testimony contradicts itself. In all these cases, it is difficult to understand, given that the driver was trying to circumvent the control, his interest in pointing his steering wheel at the police. On the other hand, one can well imagine the interest of the police in establishing such a version, so as to be able to plead self-defence.

To come back to what happened in the Alpes Maritimes, the press release of the Prosecutor tells us that two investigations have been opened. One against the drivers/passers-by, for aiding illegal entry and residence, refusal to obey “aggravated by endangering others”, and attempted homicide on PDAP. The other, with the IGPN, against the murderous cops, for “deliberate violence with a weapon by a person holding public authority followed by an incapacity of more than 8 days”. We are talking here about a man, a simple passenger, who died of a head wound as a result of a police shooting. And the Prosecutor speaks of an ITT of 8 days. Attempted voluntary manslaughter for a man who in all likelihood tried to get around (and not run over) a police roadblock, voluntary violence resulting in 8 days’ ITT for the man who struck the fatal blow and who was released free after a few hours in police custody. Double standards.

The four people arrested were released following a hearing on Monday 21 June before the Court of Appeal in Aix.