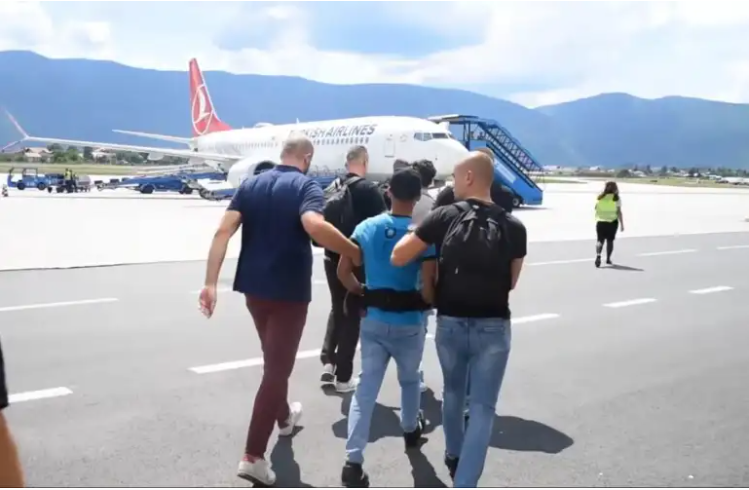 On 31 July, with a scheduled flight, the Sarajevo government met the requests of European institutions: the aim is to externalise expulsions as well. And it promises readmission agreements with Afghanistan, Syria and Bangladesh: yet another blow to the right to asylum

Bosnia and Herzegovina carried out the first repatriation operation of two migrants of Pakistani origin living in the territory without a regular residence permit. The scheduled flight that landed on 31 July 2022 in Islamabad added a new important piece to the European Union’s strategy of outsourcing the management of the migration phenomenon, which entrusts the Sarajevo government with the ‘dirty work’ of expulsions. For migrants and asylum seekers, arriving in Bosnia and Herzegovina therefore means entering a ‘trap country’, as Gianfranco Schiavone of the Italian Solidarity Consortium (ICS) writes, where ‘refugees cannot enjoy any protection and at the same time are exposed to refoulement to their countries of origin’.

To date, Bosnia and Herzegovina is the only country in the Western Balkans to have a readmission agreement with Pakistan -signed in early November 2020 after more than ten years of negotiations- after the Islamabad government suspended the one signed with the European Union in 2015. The agreement, which came into force on 23 July 2021, was mandated by the European institutions: ‘In fact, it was placed as a pre-requisite for the Balkan country to enter the EU: the signing of agreements with third countries to facilitate the expulsion of migrants is a fundamental step,’ explains researcher Gorana Mlinarevic. Also because for several nationalities, such as Pakistan, this is the only way for the EU to repatriate people. And Brussels knows this well’.

The media attention (with even a video posted on social networks) given to the departure of this first flight -which, after taking off from Sarajevo on 31 July, stopped over in Istanbul and then headed to Islamabad- demonstrates the Bosnian authorities’ awareness of the need to show that commitment on the migration ‘management’ front is not lacking. ‘Certainly a lot of emphasis has been placed on the operation, including the publication of videos on the interior ministry’s social profiles,’ Mlinarevic continues. However, one has to consider that the operations are very expensive and the government does not have enough budget to cover them. I think that soon it will be the European institutions themselves that will finance the repatriations’. The economic problem was also underlined by the Bosnian institutions, which, however, claimed that the operation was successful. “Remember how many said that this agreement would never succeed? -Saša Kecman, Minister of Security, told Radio Free Europe with satisfaction. It is only two people, of course, perhaps it only seems symbolic, but it has completed the work of over a year and a half. What is important is to show that the system works and that Bosnian citizens can see it too’.

The authorities in Sarajevo continue to approach the migration issue under the banner of emergency. But this is not the case. As of 24 July 2022, there were 9,766 new arrivals in Bosnia and Herzegovina since the beginning of the year, in line with the previous year when there were 15,740. There were few arrivals outside institutional reception centres: in the International Organisation for Migration’s (IOM) July report, there were about 743 people concentrated mainly in the north, in the area bordering Croatia. In the country at the end of July there were a total of 1,735 migrants in four reception centres: 394 in Borici and Lipa, again in North-West Bosnia, and 1,341 in the centres of Blažuj and Ušivak near Sarajevo.

Not least because of these small numbers, the construction of the Lipa camp, financed by the European Union and opened in November 2021, immediately aroused ‘suspicion’ among those involved. “I believe that it will be used as a base to systematise expulsions: geographically it is close to the border with Croatia and such a camp also facilitates the registration of people,” comments Mlinarevic. As recounted in the report edited by RiVolti ai Balcani, the Temporary reception centre with 1,500 places – single men, women and minors – is located at an altitude of 800 metres, almost 25 kilometres from the first hospital and with no possibility of being a place where people build their future.

“The migrants will thus first be deported to Lipa, as they were registered there and, in a chain, deported to Pakistan through formal channels,” the researcher concludes.

However, deportations are still a slow procedure for Bosnia and Herzegovina as well as for European countries, mainly due to the difficulties in organising return flights, costs and getting the green light from the embassies of the countries of origin. As reconstructed by Radio Slobodna Evropa, a media agency founded by the US Congress, the authorities must go through the Pakistani embassy in Sarajevo, which sends Islamabad a request to verify the identity of the person to be deported. This procedure can take up to 90 days. So far, hundreds of such requests have been sent and it seems to have taken the government of Pakistan a long time to process them. But Security Minister Kecman said that the Pakistani ambassador in Sarajevo is ‘ready to cooperate’. The aim of the authorities is to speed up this process. According to the newspaper, representatives of the National database and registration authority (Nadra), a Pakistani agency that manages databases and issues personal documents, as well as the Agency for Identification Documents, Records and Data Exchange of Bosnia and Herzegovina recently visited the Balkan country.

The World Organisation for Migration (IOM), the de facto operational arm of the European institutions in the country, plays a key role in this. In the case of the Lipa camp, for example, management is entrusted to the Service for Foreigner’s Affairs (Sfa) of the Ministry of Security. In practice, however, staff recruitment and contracts are signed by the IOM, while salaries are covered by the European institutions. “The IOM has become one of the most important donors in the country, operating in various sectors of civil society,” reads the report People on the Move in BiH 2019-2021. Organisations receiving funds are obliged to follow the donors’ instructions and requirements’. This is also why, according to Mlinarevic, the role of the International Organisation for Migration will be paramount on the “deportation” side. “I don’t think we will see flights directly managed by the EU and Frontex, I believe that it will be the officials of IOM themselves who will be involved in these operations as they already are in the registration of the data of those transiting the country. There is no independent NGO that monitors the respect of human rights, neither in the camps nor during the process for the presentation of asylum applications; Oim is asked to do this when instead it is the same organisation that is complicit in violations’.

The future is not rosy. In a document published in October 2021, the EU points out that Bosnia and Herzegovina had concluded ‘readmission agreements with EU countries, all Balkan countries, Turkey, Russia, Moldova and Pakistan’ and that the Sarajevo government had ‘proposed to start negotiations also with Bangladesh, Afghanistan, Morocco and Egypt’. Pakistan is only the first step. With ‘good peace’ for the right to asylum.