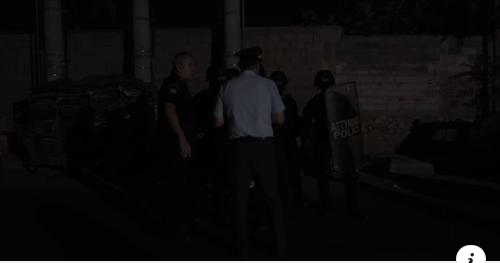 Attack to the Eleonas camp, Greece

A violent police operation was carried out in Eleonas camp today.

The struggles goes on.

Today, in the early hours of 18/8 (around 4 am), a violent operation was carried out by the Greek police, in particular by the MAT and EKAM forces, in the Elaionas camp, as part of the planned decision of Municipality of Athens and the Ministry of Migration, regarding the gradual evacuation of the refugee camp and the displacement of the residents outside Athens.

The result of the operation, despite the mobilization of large police forces, was limited to the transfer of 30 migrants who were “convinced” to move to other camps, in this particular case to the Schistos camp. To carry out this transfer, the repressive forces clashed, with violent charges and launches of chemicals, with a crowd of several dozen migrants and supporters, including pregnant women and children, who refuse to proceed with the evacuation process, which should take several weeks.

The “consent” of these around 30 people, used, according to the permanent tactic of the administration and the Ministry, as a lever for pressure, division and repression of the migrant’s block that is fighting, was extorted after a lot of threats and lies, in a regime of terror and without any written guarantee as to where exactly the migrants will be transferred.

The repressive operations of MAT and EKAM were “coordinated” by the new commander of the camp, Maria – Dimitra Niutsikou, obviously proud of the repression work, known in the past for her repressive managament in the camps of Samos and Skaramangas.

The clash between migrants & solidarians and the repressive forces started from the external area in front of the camp, centered on an entrance-exit gate, where the MAT kicked migrants and solidarians sitting in front of the gate, and then (the clash) was moved into the camp, where fighting, stone throwing and chases followed.

The struggle continues and will continue for the next few weeks, as long as the majority of the camp’s residents refuse to accept their forced movement out of Athens.

The struggle of Eleonas migrants is a struggle not to be transferred from Eleonas to even more unfavorable conditions, but to obtain decent housing in the cities.

It is a fight against the racist system of closed borders and concentration camps, which treats people as garbage transported from one camp to another, as objects of exclusion or exploitation.

It is a fight against the “gentrification” of Athens that is systematically promoted by the Greek state, the government and the mayor Bakoyannis, who hides his extreme racism and class hatred of the poor behind an “alternative” facade, promoting “double restructuring” of Botanikos and Eleonas areas, the attack against Lofo tou Strefi (Streffi’s hill) and against Exarchia square (under the pretext of contructing the subway), and other plans for forced” redevelopment “of neighborhoods based solely on the interests of big businessmen.

The migrant’s struggle in Eleonas is the continuation of the struggle against the borders, of Evros, of the Aegean, of Greece, of Europe, by other means.

War and militarization are the response of the capitalist states to the movement of migrants. Solidarity and international struggles of migrants and locals are our response to them.

Eleonas’ migrants are not intimidated by the fascists of the Greek state and their political projects. They will continue their struggle and ask for our support.

So far there are reports of 6 arrests made.

The charges are inciting, threatening, resisting, disturbing a public service, and for one person, in addition, disturbing the peace.

A manifestation will be held at 7 p.m. in Monastiraki Square against the Greek state of racist repression and concentration camps, murderers and torturers. 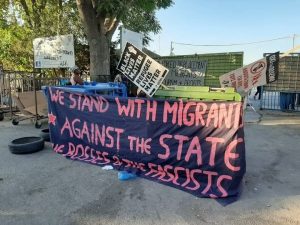